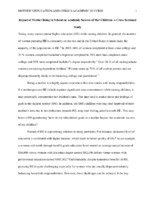 The citations below are meant to be used as guidelines. Patrons must make any necessary corrections before using. Pay special attention to personal names, capitalization, and dates. Always consult appropriate citation style resources for the exact formatting and punctuation guidelines.
Item Information
Item Link - Use this link for citations and online mentions.
http://hdl.handle.net/10755/624575
Abstract

Today, many nurses are pursuing higher education (HE) while raising children. However, the pursuit of HE and raising children are both highly demanding tasks that may potentially create imbalance in life, if both roles are assumed simultaneously. This compromises the quality and quantity of time a student mother (SM) may spend with her children. On the other hand, the SM's child (ren) who constantly watch their mother studying (instead of spending time with them) may feel deprived of mother's love and attention. Her child (ren) may even feel jaded towards HE, which is the last thing a mother would ever want. Consequently, at times a SM may feel disheartened, guilty, and ashamed for her inability to spend quality time with her child (aren) when they need her the most. Therefore, the pursuit of HE while raising child (ren) may be a highly stressful endeavor, which may leave a SM wondering "whether the pursuit of her own HE is worthwhile or not ."

A SM may question “how does the pursuit of my own education impact the academic success (AS) of my children?’’ There was a paucity of evidence in this context, which provided an opportunity to embark upon this phenomenon of interest “Impact of mother being in school on AS of her child (ren).”

Analysis of available evidence suggested four principal findings: 1) maternal role enhances a woman’s motivation and persistence in HE, 2) mothers disproportionately balance parenthood 3) there is lack of cooperation from key stake holders (universities, employers, members of families and communities) in promoting HE for SMs, 4) quality-time between parents and children is the most important factor for children’s positive behavioral outcomes including AS.

This study findings demonstrated a statistically significant correlation between increased maternal education and enhanced college success of her child (ren). Hence, the pursuit of HE by SMs is quite worthwhile. Hopefully, this will be encouraging for future SMs especially those who often feel disheartened, ashamed, and guilty for not being able to spend enough time with their children due to their own pursuit of HE. In addition, this finding provides an evidence-based rationale for the key-stakeholders to support HE efforts of future SMs.

Repository Posting Date
2018-07-03T16:25:54Z
Notes
This work has been approved through a peer-review process prior to its posting in the Virginia Henderson Global Nursing e-Repository.
Type Information
Category Information
Rights Holder