"Falling Hair and Drilling Bone": A Phenomenological Inquiry Into the Lives of Adolescents Undergoing Chemotherapy 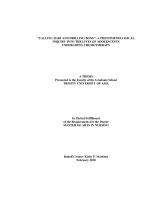 The citations below are meant to be used as guidelines. Patrons must make any necessary corrections before using. Pay special attention to personal names, capitalization, and dates. Always consult appropriate citation style resources for the exact formatting and punctuation guidelines.
Item Information
Item Link - Use this link for citations and online mentions.
http://hdl.handle.net/10755/623705
Abstract

This study, employing the interpretative phenomenological approach, explored the adolescents‟ experience of undergoing chemotherapy. Five (5) coresearchers were carefully chosen based on a present criteria set upon by the researcher and are as follows: 1) They are willing to articulate, share, participate, and describe their lived experiences, 2) They have undergone at least the second chemotherapy sessions, either as an in-patient or out patient, as one of their treatment modality for their cancer regardless of its type and severity. And 3) that they are adolescents between 12-18 years of age. Moreover, the co-researchers were carefully chosen to ensure that the three (3) main phases of chemotherapy (Induction, Consolidation & Maintenance) is equally represented such that one (1) is undergoing the induction phase, another is on the consolidation phase, two (2) are in the maintenance phase while one (1) had just recently finished the treatment. Additionally, two (2) of them was diagnosed with leukemia, another two (2) with lymphoma and one (1) with bone cancer, the only one that undergo chemotherapy as an in-patient while the rest as an out-patient. Furthermore, of the five (5) co-researchers, four (4) were male while one was (female). The experiences of the co-researchers were subsequently gathered and enriched via the following methods: 1) Interview (Pakikipagusap), 2) Storytelling (Pakikipagkwentuhan), 3) Participant Observation (Pakikipamuhay), 4) Art (Sining) and 5) Group Discussion. Subsequently, three (3) levels of reflective analysis was done on the narratives of the co-researchers following the process specifically developed by the researcher, inspired by the phenomenological methods of Max van Manen and Colaizzi. Through the process of reflective analysis, three (3) themes and seven (7) subthemes were drawn and are as follows a) I am Normal More than Special (Normal na Bata, Hindi Kakaiba) with three (3) subthemes namely: (a.1) Behind the Mask: Who am I Now? (Sa Likod ng Takip, Sino na Ako?) (a.2) Forbidden but not Forgotten (Pinagbawalan pero di Kinalimutan) and (a.3) New Me: Metamorphosis of Self (Bagong Anyo: Sarili’y Pabago-bago); (B) Complex Chemo: Welcome to My Reality (Chemo Komplikado, Yan ang Totoo) with three (3) subthemes which are: (b.1) Good News and Bad News: The Amazing Twins, (Mabuti at Masamang Balita: Laging Magkasama), (b.2) Needle Here, Needle There, Poke Me Everywhere (Tusok Dito, Tusok Doon, Tusok Panapanahon) and (b.3) Chemo Condo: Are You In or Out (Parang Nasa Condo Pagnagchechemo) and (c) F4 (family, faith, friends and future): Maintains My Core. (Pamilya, Paniniwala, Kaibigan at Kinabukasan: Tagapangalaga ng Katinuan). These themes represent the constant and dynamic interaction of the co-researchers self as it maintains a feeling of normality (a) while undergoing the intricacies and complexity of the chemotherapy experience (b) and the things that serves as their source of the coping and motivation to move on (c). Further reflective analysis of the themes and subthemes reveals the essence of the phenomenon under investigation and is epitomized in the eidetic insight that: undergoing chemotherapy in the eyes of an adolescent is analogous to a tree journeying through the four seasons of change, eternally struggling to adjust, adapt, abide and assimilate the alterations brought about by the seasons, chemotherapy, while trying to maintain a normal sense of self. It is a phenomenon of conflict, of constant struggle between meeting the desire of normalcy and autonomy of the adolescents to letting oneself succumb to the dictum and demands of chemotherapy. This essence is further embodied in the Symbolic Representation entitled “Normalcy Amidst the Seasons of Change”.

Repository Posting Date
2017-12-07T16:40:07Z
Notes
This work has been approved through a peer-review process prior to its posting in the Virginia Henderson Global Nursing e-Repository.
Type Information
Category Information
Degree Information
Rights Holder

Except where otherwise noted, this item's license is described as http://creativecommons.org/licenses/by-nc-nd/4.0/