It's Fat Tuesday! Get the Skinny on Lean and the NPD Scope and Standards

One NPD department director was faced with a choice: become irrelevant and extinct or radically change the work being produced within the department. Upon direction from a chief nursing officer to “blow-up” the current department, the director began by conducting an intensive, three-month learning needs assessment and consulting a lean coach. The department held a two-day offsite strategic planning. The resultant vision and strategic objectives shaped the next year of work.<br /> <br /> The department developed specific metrics based off of the strategic objectives and the NPD scope and standards of practice. These metrics were tracked at a department huddle. Education requests (ERs) was the first process metric identified. The department identified waste by tracking ERs by type, scope, and TAT (turn-around-time). The department also identified large volumes of tasks being completed that were not within the scope of NPD practice. Out of 108 tracked requests only 43% were within scope. Process improvement requests compiled 38% and administrative requests composed a staggering 19%. This data confirmed what the staff had attempted to describe in initial conversations with the new director.<br /> <br /> The department deployed rapid cycle improvement techniques to start improving employee morale and establish a vetting process for education requests. Within one month, the number of education requests within the big six increased to 86%. Staff morale improved on a metric that was also being tracked by 15%. Sustainment models were developed to capture the improvement. In addition to improving morale and productivity, Lean improvement efforts contributed to roughly $500,000 per year savings in the NPD budget. 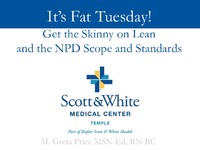