Other Title(s)
Palliative Care in Education 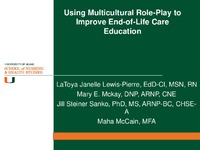 The citations below are meant to be used as guidelines. Patrons must make any necessary corrections before using. Pay special attention to personal names, capitalization, and dates. Always consult appropriate citation style resources for the exact formatting and punctuation guidelines.
Item Information
Item Link - Use this link for citations and online mentions.
http://hdl.handle.net/10755/622173
Abstract

Purpose: The purpose of the study was to evaluate the effectiveness of an undergraduate End-of-Life education with simulation. In 2012, the World Health Organization (WHO) reported 56 million deaths worldwide. Furthermore, the 2014 Institute of Medicine report Dying in Americacalled for improvements in end-of-life care. Providing dying patients with high-quality family and patient-centered end-of-life care that aligns with the patients’ values and informed preferences poses challenges. One aspect of the problem is nursing curricula and clinical rotations often lack educational opportunities that address such challenges related to end-of-life (EOL) care conversations. As a result, many nurses are uncomfortable or ill prepared to carry out appropriate end-of-life conversations.

Simulation-based education presents a realistic way to practice these skills and provide a safe environment to where mistakes can be made in the absence of patient harm (Founds, Zewe, & Scheuer, 2011). Simulation creates a valuable opportunity for students to have authentic experiential experiences that support the development of technical, cognitive, therapeutic, and psychological skills (Roberts &Greene, 2011). End-of-life care simulation experiences, that include a unique blend of promoting competence with therapeutic communication, cultural competence, medication management, nursing interventions, and empathy, can help to better equip nurses to deal with end-of-life care. Standardized patients (SPs) are instrumental in providing realism in scenarios, but SPs can be costly, and difficult to find. To address this problem, we present an innovative approach that utilizes multicultural arts and sciences students enrolled in a theater course that trains them to be SPs. The SPs were culturally representative thus allowing the nursing students to experience a variety of diverse patient care demands that are common in today’s healthcare.

This approach also utilizes a unique two-phased debriefing process that allows nursing students to experience immediate in-character feedback at the bedside followed by traditional debriefing in a separate area. The traditional debriefing is replete with a debrief and a reflection of the in-character feedback as well as the scenario action. This approach allows students to reflect on the experience as a whole as well as benefit from the “patient” view of their care.

Methods: Students participating in a theater course were trained to play SPs followed with the more specific training to be able to realistically play the family member of a dying patient. This tactic also allowed for the inclusion of cultural considerations to be woven into the end-of-life scenarios. The scenario presented a woman with Non-Hodgkin’s Lymphoma who was brought by the Emergency Medical Services (EMS) to the Emergency Room. The students enter the “scene” to find the SP, playing either the patient’s daughter or son, at the bedside. The major objective of the scenario was for the nursing students to provide therapeutic communication as they managed the care of patient and the family as they navigate the end-of-life process.

During the initially run sessions, SP feedback was given as part of the usual debriefing process, with the SP staying in character. However, upon receiving feedback from the nursing students that this approach was not well received, modifications were made to instead include in-character feedback immediately following the end of scenario action at the bedside. Subsequently this was followed with traditional debriefing in a classroom.

Results: Fifty-six participants completed a mixed method study. The Katherine Frommelt (1991) Attitudes toward Care of the Dying (FATCOD-B) survey was administered at two time points (pre/post). Qualitative research questions with content analysis tapped into the participants’ attitudes related to the end of life educational experience. Responses from the nursing students revealed that receiving feedback from a SP was a new experience and something to which they were not initially receptive. Following the change to the two-phased approach, the nursing students’ opinions of the overall experience was more positive. They felt more aware of the family members’ needs and shifted from a patient-focused care approach toward a family-centered care approach. When asked about their simulation experience, what their thoughts were related to end-of-life, and their feelings related to end of life care, respondents described the scenario as being realistic and a valuable learning opportunity. Participants were also asked “which learning situation had the biggest impact on your thoughts and feelings related to end-of-life care?” Many stated the simulation influenced their thoughts and feelings on end-of-life care; one participant mentioned that when an SP daughter asked “if her mother died” it created a lasting impression.

Conclusion: Preparing to interact with patients and families at the end-of-life requires individuals to be psychologically and physically present in the patient’s care. Using SP students was a novel way to provide a rich learning experience and added realism to an end-of-life simulation experience. Realism was further deepened through the integration of SPs from different cultures and genders, another important element that reflected the influence of culture on end-of-life nursing care. While the approach was generally successful, there are important considerations to heed. Both groups of students must understand each other’s roles, pre-briefing is vital to inform nursing students that the SPs will provide in-character feedback, and immediate bedside in-character SP feedback is received may be better received than having SPs participate in debriefing. Finally, the debriefing should include a discussion of the bedside feedback to give the opportunity for learners to reflect on receiving feedback from the “patient’s” perspective. Creating experiential learning with a multicultural element in simulation is integral toward preparing future nurse for culturally diverse healthcare.