Purpose: This completed randomized controlled trial of 198 premature infants born at 29-34 weeks gestation and their mothers examined the impact of the H-HOPE (Hospital to Home: Optimizing the Preterm Infant’s Environment) intervention on infant behavior, infant feeding and growth during hospitalization, mother-infant interaction, and illness visits when the infants reached 6-weeks corrected age (CA). The research was guided by two models: Developmental Science and Adult Learning Theory.

Results: There were no differences between the groups at baseline for any of the dependent variables. The infant behavior data showed that by day 7, the intervention group exhibited a significantly higher mean frequency of orally directed behaviors when compared with the Attention Control group (12.6 vs. 7.1 pre-intervention, p < 0.10; 51.8 vs. 33.2 during intervention, p < 0.10; and 8.9 vs. 5.3 immediately prior to feeding, p < 0.05). Also on day 7, the H-HOPE intervention group exhibited a significantly higher proportion of time spent in an alert state during intervention (0.26 vs. 0.11, p < 0.05) and immediately after intervention (0.28 vs. 0.06, p < 0.01).

Infant feeding during hospitalization differed between the two groups. A quadratic trend was observed for infant feeding as measured by the number of sucks, the number of sucks per sucking burst, and a sucking maturity index. The intervention group experienced an increasing significantly improved oral feeding by day 7 (Model estimates for group by day: number of sucks - β = 13.69, p < 0.01; number of sucks per sucking burst - β = 1.16, p < 0.01; and the sucking maturity index β = 0.12, p < 0.05). Sucking pressure increased linearly over time, with significant between-group differences reached at day 14 (β = 45.66, p < 0.01). During hospital stay, the H-HOPE group infants gained weight more rapidly over time when compared with infants in the control group (p = 0.04) and grew in length (p = 0.015) more rapidly than control infants, especially during the latter part of the hospital stay.

After hospital discharge and when the infants reached 6-weeks CA, NCAST and DMC scores for the Control and H-HOPE groups were compared using t-tests, chi-square tests and multivariable analysis. Compared with the Control group (n = 76), the H-HOPE group (n = 66) trended toward higher NCAST scores overall and higher maternal Social-Emotional Growth Fostering Subscale scores and had significantly higher scores for the overall infant subscale and the Infant Clarity of Cues Subscale (p < 0.05). H-HOPE group dyads were also more likely to have high responsiveness during play as measured by the DMC (67.6% versus 58.1% of controls). After adjustment for significant maternal and infant characteristics, H-HOPE group dyads had marginally higher scores during feeding on overall mother-infant interaction (β = 2.03, p = .06) and significantly higher scores on the infant subscale (β = 0.75, p = .05) when compared to controls. Infants assigned to the H-HOPE group were also half as likely to have illness episodes (illness visit to the clinic, emergency department (ED) or hospital readmission) as control infants (OR = 0.46, 95% CI = 0.22, 0.95). 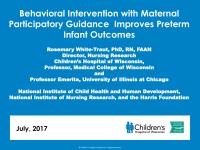 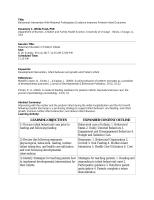