Other Title(s)
Health Promotion of Patients With Catheters 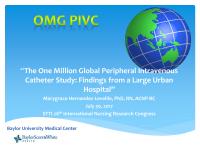 The citations below are meant to be used as guidelines. Patrons must make any necessary corrections before using. Pay special attention to personal names, capitalization, and dates. Always consult appropriate citation style resources for the exact formatting and punctuation guidelines.
Item Information
Item Link - Use this link for citations and online mentions.
http://hdl.handle.net/10755/622157
Abstract

Over a billion Peripheral Intravenous Catheters (PIVCs) are inserted each year in hospitalized patients worldwide and data on the care and management of these devices is largely unknown. However, data on the prevalence of PIVCs and their management and infection practices across countries and regions are limited. While PIVCs are deemed critical for medical care, they expose patients to bloodstream infections, endocarditis and thrombophlebitis (Bacerra, Shierley &Safdar, 2016). There are many avenues of research to be explored with intravenous catheters. Should PIVCs routinely be changed out at 72-96 hours? Are there any ramifications to having idle PIVCs? According to Keogh (2013) many PIVCs can be safely changed only when clinically indicated. In an effort to understand how PIVCs are managed, an international study, “One Million Global Catheters: PIVC worldwide Prevalence Study”, was initiated by a group of investigators in Sydney, Australia. . The worldwide study included fifty one countries with 418 participating hospitals, fifty three of which were in the United States with a total of 5048 patients (Alexandrou et al, 2015). The total number of PIVCs submitted into the One Million Global (OMG) database was 40,620. The study objectives were to assess the prevalence of PIVCs and their management practices, identify patients and PIVC characteristics, the prevalence of localized symptoms, and PIVC securement and dressing practices.

A convenience sample of 181 medical/surgical patients were recruited and consented by bedside nurses from a large urban teaching hospital to participate in this prevalence study in March of 2015. The study received approval from the Healthcare system institutional review board. A validated data collection tool was utilized by bedside nurses who were trained in Human Subjects Protection and data collection for this study. All observational data collected was de-identified and maintained in a locked secure area. Data was then electronically sent to the study principal investigators in Sydney via a secure modality. Statistical Software (SAS version 9.1; SAS Institute, Inc., Cary, NC) was utilized for statistical analysis. Each site was then presented with individual findings in addition to individual countries and region findings.

The majority of the patients were 18 years and older (99.5%), and half of them are men. Eighty seven percent of PIVCs were inserted for IV fluid and IV medications orders, and the majority were inserted by IV team and nurses (99%). Ninety four percent of the PIVC sites had a borderless transparent polyurethane dressing which reportedly were clean, dry and intact (87%). The majority of PIVC site assessments were documented in patients’ charts in last 24 hours (91%) and with no clinical symptoms (88%). A small proportion of PIVC sites with blood in line (3.9%), pain/tenderness on palpation (2.8%), and bruising/dried blood around PIVC (2.8 %). PIVC site selection was usually the forearm (40%) with a 20 gauge(35%) or 22 gauge (34%), respectively.