ABCDE Bundle Adherence: The Influence of Access to ABCDE-Enhancing Supplies and Equipment

Methods: This is a secondary analysis of data from a pilot study investigating organizational factors influencing ABCDE bundle implementation. The Conceptual Framework for Interprofessional Bundle Implementation guided the study. Physical environment data were collected from participating medical and surgical ICUs (n=10) in six academic medical centers. The principal investigator personally visited each site between April 2014 and August 2015, during which time available ABCDE-enhancing supplies and equipment were logged. Daily execution of the ABCDE bundle was at the discretion of the ICU team and guided by a standardized protocol. Adherence was tracked daily via the ABCDE bundle checklist. ABCDE bundle adherence is defined as all five components being completed on a ventilator day (i.e., Awakening trial [SAT], Breathing trial [SBT], Coordination [SAT precedes SBT], Delirium assessment, Early mobility). ABCDE bundle adherence was aggregated at the unit level.

Conclusion: The ABCDE bundle is recommended practice for critical care, but utilization is low and implementation varies. In this study, the number of ABCDE-enhancing supplies/equipment procured by the ICU is not noted to be consistent with greater adherence to the ABCDE bundle. In fact, there were more than twice the number of ABCDE-enhancing items in the lowest (n=7) performing unit compared to the highest performing unit (n=2). These data suggest that environmental factors contributing to the workload burden of ABCDE bundle execution may not be so much related to the presence or absence of ABCDE-enhancing supplies/equipment, but more so to unit architecture (e.g., configuration, number of corners) or distances to supplies/equipment. However, unit milieu (e.g., teamwork, coordination across disciplines) and policy and protocol factors (e.g., protocol complexity, role clarity) must also be more closely explored. 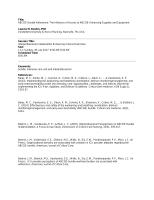