Other Title(s)
Transforming Nursing Knowledge, Education, and Practice Through Pre-Briefing and Debriefing [Symposium] 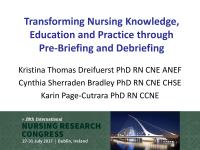 The citations below are meant to be used as guidelines. Patrons must make any necessary corrections before using. Pay special attention to personal names, capitalization, and dates. Always consult appropriate citation style resources for the exact formatting and punctuation guidelines.
Item Information
Item Link - Use this link for citations and online mentions.
http://hdl.handle.net/10755/622078
Abstract

In this interactive session, nursing researchers will present findings from their work on prebriefing and debriefing applicable to simulation and clinical settings in academe and practice. Speakers will engage the audience in a discussion of ways to translate these findings into strategies that can transform nursing knowledge, education and practice.

Abstract Text:
Purpose: The purpose of this exploratory, quasi-experimental, pre-test-post-test study was to discover the effect of the use of the Debriefing for Meaningful Learning (DML) method of debriefing on the development of clinical reasoning in traditional prelicensure nursing students in a BSN program in the United States. Debriefing has been found to be the most significant part of a simulation experience on student learning (Shinnick, 2011). DML is one evidence based method of debriefing that can be used in simulation and other clinical and educational settings to uncover and foster thinking and acting like a nurse. DML is a systematic process for debriefing in which different aspects of the relationship between thinking and actions practice are uncovered, reflected upon and explicated to generate new meanings and understandings which foster clinical reasoning (Author, 2015).

Methods: Clinical reasoning was measured in 238 participant students from a traditional baccalaureate program in a School of Nursing located in the United States (US) who took an adult health course that incorporated simulation experiences into the curriculum. Participants were assigned to either the experimental or control group where DML was compared to customary debriefing using the Health Sciences Reasoning Test (HSRT) and the Debriefing Assessment for Simulation in Healthcare©–Student Version (DASH©–SV) with four supplemental questions about the DML (DMLSQ) process, during the post-debriefing assessment.

Results: The data revealed that there was a statistically significant difference in the change in scores between pre-test and post-test for those who used the DML as compared to the control when the relative difference between mean scores was calculated and a Mann-Whitney-Wilcoxon test was performed, U = 3973.5, W = 10759.5, Z = -6.059, p = 0.000.

Conclusion:  The findings from this study are important because they represent the incremental impact of learning by students from one DML debriefing intervention. DML did not teach students the content on the HSRT test, or how to take the test, but rather how to think about clinical information and decision-making within the context of simulated patient care. By actively modeling reflection-in-action, reflection-on-action, and reflection-beyond-action, the student not only debriefs the clinical experience but also anticipates how to use this knowledge and information in other clinical contexts and builds clinical reasoning skills. The literature on learning offers two possible explanations. The DML strategy may have been either so innovative that it stimulated learning and adoption, or so credible that it affirmed how students were already reasoning and supported their ability to be confident in how they reason through clinical situations. Since this research has been replicated with similar findings to this original research (Forneris et al., 2015), the former explanation is further supported.

These study findings have led to the adoption of DML in schools of nursing and clinical practice settings across the United States, Canada, China, the United Kingdom and Australia. DML was also chosen as the debriefing method for the National Council of State Boards of Nursing National Simulation Study (Hayden et. al., 2014) and regulatory bodies in the US and Canada have begun adopting language advocating the use of evidence-based debriefing practices by schools of nursing. This session will include a detailed description of DML and an interactive discussion of the implications from these findings for transforming nursing knowledge, education and practice globally including regulation changes that are beginning to be seen in the United States that are correlated to use of DML.

Description
Event Theme: Influencing Global Health Through the Advancement of Nursing Scholarship
Repository Posting Date
2017-07-24T18:51:31Z
Notes
One combined slide deck was submitted for all presentations in the symposium. This slide deck will be attached to other records in the repository. This presentation is the second in the session and starts on slide 13. Items submitted to a conference/event were evaluated/peer-reviewed at the time of abstract submission to the event. No other peer-review was provided prior to submission to the Henderson Repository.
Type Information
Category Information
Conference Information
Rights Holder