More than 63,000 very preterm infants (1 and survival free from major morbidity is a significant problem for them.2 Up to 30%3 of these infants experience a neonatal infection and 5-15% of these infants acquire an infection or inflammation of the gastrointestinal (GI) track called necrotizing enterocolitis (NEC); 4,5 NEC has a mortality rate as high as 50%.6

Hypothermia is related to increased morbidity and mortality in preterm infants7-11 and continues to be a problem in very preterm infants.12  Hypothermia is associated with an increased incidence of NEC in preterm infants.13 Abnormal postnatal circulation can lead to problems with feeding intolerance and intestinal motility, both associated with NEC.14 Continuous temperature monitoring is crucial to preventing hypothermia in very preterm infants due to their inability to self-regulate their body temperature.15 Abdominal temperature (AT) is measured with a covered thermistor on the skin surface, which reflects core temperature in preterm infants, and foot temperature (FT) is measured on the sole of a foot.16 When a preterm infant has central hypothermia, peripheral vasoconstriction should decrease blood flow to the feet to limit heat loss, but this mechanism is not operative in most very preterm infants in the first hours after birth.17,18 Inability to effectively dilate and constrict blood vessels affects thermoregulation negatively. Previously, we examined AT and FT in 10 very premature infants every minute over their first 12 hours of life. Only one infant exhibited peripheral vasoconstriction briefly and 7 of 10 infants kept their FT greater than AT for most of their first 12 hours, indicating altered vasomotor tone.17 Because of this finding, we wanted to examine thermal patterns longitudinally.

The purpose of this study was to examine AT and FT in 30 very preterm infants over their first 2 weeks of life in relationship to morbidity and mortality using an exploratory case study approach.

Methods: After IRB approval, parents of infants expected to be born less than 29 weeks GA were consented for study participation, prior to their infants’ birth. Infants were eligible for enrollment by 6 hours of age if their birth weight was between 500 and 1200 grams and if there were no visible anomalies or medical complications initially after birth. AT and FT was measured every minute using a thermistor secured to the skin, which stored temperatures into a data logger. Once the infant reached 2 weeks of age, temperatures were downloaded to a secure server, then imported into a SAS (Cary, NC) data set for analysis. Each physiological variable had 20,000 measures. The research nurse entered clinical data from the infants’ medical record into a data form.

Three infants of the 22 were diagnosed with NEC by an abdominal radiograph between 33-60 days of age. NEC occurrence was too low for hypothesis testing; however, the 3 infants who acquired NEC prior to discharge had a higher mean percentage of minutes (26.88%, SD 10.56%) in their first 2 weeks of life with warmer FT than AT compared to infants that did not acquire NEC (17.88%, SD 6.28%), p

Four infants had infections during their hospital course. The infants who acquired an infection or UTI had a higher mean percentage of minutes (27.78%, SD 9.52%) over their first 2 weeks of life with warmer FT than AT compared to the 17 infants who did not acquire infection (16.44%, SD 5.34%), p

We also compared infants born to mothers who smoked during pregnancy to infants born to mothers who did not smoke during their pregnancies by self-report of smoking. Infants of mothers with a smoking history tended to have an increased mean percentage of minutes with warmer FT than AT over their first 2 weeks of life (26.6%, SD 25.75, n=4) than non-smokers (16.7%, SD 16.99, n=18), p

The infants with the highest mean percentage of minutes with FT greater than AT over their first 2 weeks of life had more “risk” factors than infants with lower mean minutes. The infant with the highest mean minute percentage was an 880 gram, 27 weeks GA African American female infant who was born to a mother who smoked and used drugs during pregnancy by self-report. She acquired an infection in the neonatal period and NEC at 33 days of age. The infant had two blood transfusions, two PICC line attempts, and was fed days 4-11 and 14. The infant was also on dopamine and epinephrine for the first 4 days of life. This infant had 38.51% of her minutes over the first 2 weeks of life with a warmer FT than AT.

The only other infant with more than 30% of minutes with FT warmer than AT over their first two weeks of life was an 890 gram, 23 week GA African American female infant with 32.66% minutes. This infant was born to a mother who had chorioamnionitis and admitted to drug use during her pregnancy. The infant had presumed sepsis at birth. This infant also received two blood transfusions and three PICC line attempts in her first 2 weeks of life and was noted to have three episodes of abdominal distention. She was fed from 4-14 days of age.

Conclusion:  Very premature infants with colder central temperatures (AT) and discordant warmer peripheral temperatures (FT) have an increased risk for infection. We also found infants who were diagnosed with NEC had more time in their first 2 weeks with warmer FT than AT compared to infants that did not acquire NEC; however, our sample was small and we did not have enough NEC cases for statistical comparison. The infants in our study were more likely to have colder AT than FT if they received a blood transfusion or were on CPAP. However, intubated infants had more time spent with warmer AT than FT. Infants in our study who were born to a mother who smoked during pregnancy were more likely to have warmer FT than AT over their first 2 weeks of life compared to those that did not have in utero exposure to tobacco. Approximately 12% of pregnant women smoke in the United States during pregnancy.19 Smoking during pregnancy is related to fetal growth restriction, preterm delivery and infant death with 23-34% of infant deaths from Sudden Infant Death Syndrome (SIDS) associated with maternal smoking. Maternal smoking also increases the risk for postnatal infections.20 A larger study is needed to examine central and peripheral temperature in very preterm infants over their neonatal period in relationship to infection, NEC and maternal smoking. Continuous monitoring of AT and FT may guide acute clinical care in the future to decrease acute morbidity and identify infants who are high risk.

Popular Works for Dail, Robin B. by View 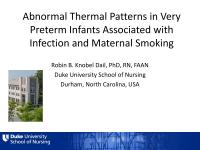 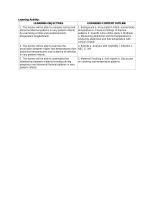 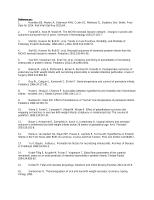