What Do Nursing Students Know About the Homeless and Their Care Experiences? A Qualitative Study

Other Title(s)
Nursing Students and the Care of Vulnerable Populations 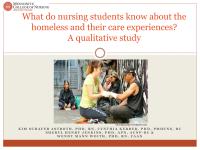 The citations below are meant to be used as guidelines. Patrons must make any necessary corrections before using. Pay special attention to personal names, capitalization, and dates. Always consult appropriate citation style resources for the exact formatting and punctuation guidelines.
Item Information
Item Link - Use this link for citations and online mentions.
http://hdl.handle.net/10755/622011
Abstract

Methods: We interviewed 19 undergraduate nursing students, aged 20 to 21, from a baccalaureate nursing program in the Midwestern United States. We obtained informed consent and demographic data immediately before initiating the audiotaped interviews. Audiotaped interviews took an average of thirty minutes to complete and were later transcribed verbatim. Field notes were maintained with each interview to allow for an audit trail. Qualitative data were analyzed through content analysis identification of themes. Coding categories were generated from the data, with final themes identified through an iterative process, until data saturation was reached. Themes were examined for fit with Leininger’s model and were also compared to themes found in the literature and examined for congruency. Descriptive statistics were used to explore participants’ characteristics. Trustworthiness was enhanced through use of an audit trail and member checking.

Student perceptions of the homeless. Students defined homelessness as lacking both a physical home and basic necessities, not having a job, and, interestingly, an absence of an emotional sense of belonging. Most students believed homelessness was primarily due to circumstances beyond the individual’s control. Some mentioned that homelessness may also be caused by poor personal choices, such as drug use, but they believed that this described only a minority of homeless people. In describing the appearance and behavior of homeless people, students asserted that the homeless wear old clothes in poor repair, have poor hygiene and grooming, and carry all their belongings with them in bags or boxes. Students envisioned a typical day for the homeless as one spent in looking for resources, food, shelter, money, and work. They described a typical night for the homeless as cold and frightening. Many thought it would be very difficult to find a safe place to sleep. Students also expressed a strong sense of empathy for the homeless. They felt sadness, shock, and humility as they described their experiences. A few reported feeling guilty if they ignored the homeless because they didn’t have anything to give them.

Healthcare of the homeless. Half of the students thought that homeless people usually did not seek professional healthcare, but instead tried to care for themselves. The other half said homeless people seek care at free clinics or hospitals. In addition, students believed that homeless people receive help from friends, family members, or strangers on the street. Lack of money or health insurance, inadequate transportation, fear of inequitable care, and stigma were described as major barriers to care. Students suggested nursing care of the homeless should be empathetic, attentive, compassionate, and equitable.

How best to teach students about the homeless. Students identified four specific teaching strategies. They suggested discussing homelessness as a topic inserted into an existing course. They also asserted that simulations in which students experience what it is like to be homeless could be informative and also give students an entirely new perspective. Several recommended developing clinical experiences in which students work in low income clinics or shelters to provide direct care for the homeless. Finally, a few students believed that cultural immersion, in which students interact with the homeless in natural environments, would be most helpful.

Conclusion: Nurses have a responsibility to advocate for the needs of vulnerable populations including the homeless. In order to be effective advocates, nurses and nursing students must thoroughly understand the issues related to homelessness. Students in this study had varying types of involvement with and knowledge of the homeless and their care experiences. Many of their perceptions were based on stereotypes, and some were patently erroneous, such as assertions that most homeless people have jobs, or that substance abuse has negligible impact on homelessness. This suggests that student nurses need more comprehensive education concerning the needs of this vulnerable population.