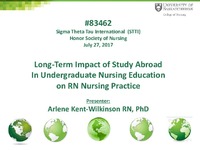 The citations below are meant to be used as guidelines. Patrons must make any necessary corrections before using. Pay special attention to personal names, capitalization, and dates. Always consult appropriate citation style resources for the exact formatting and punctuation guidelines.
Item Information
Item Link - Use this link for citations and online mentions.
http://hdl.handle.net/10755/621981
Abstract

Purpose: Study abroad experiences often have a significant impact on the lives of university students. This impact is not always understood in terms of learning outcomes, lived experience perspectives, or the impact it has on future professional practice. The purpose of the study is to explore the long-term impact of the study abroad experience on subsequent nursing practice, from the perspective of alumnae registered nurses (RNs) in Canada, who in the last eight years had a study abroad clinical placement as part of their undergraduate nursing program.

Recent societal and educational trends: Changing immigration patterns globally have resulted in more than 20 percent of Canadian residents being foreign-born. Recently, various levels of government have called for education that promotes international experiences in order to prepare graduates with the international knowledge and skills to work and live in an increasingly diverse and interdependent world. With Canadian healthcare systems experiencing increasing culturally diverse client populations, cultural competence is widely recognized as an essential component of undergraduate nursing education. Research that evaluates study abroad as a strategy to promote long-term cultural competence among nursing students is timely given recent government directives and population trends. Nursing educators worldwide are gradually recognizing the importance of exposing students to a range of learning experiences that will broaden their global perspective and enhance their cultural competency. These experiences generally occur with international exchanges, study abroad programs, university partnerships, and globally focused curriculum changes.

Background: The College of Nursing, University of Saskatchewan has facilitated study abroad clinical placements since 1998 to at least 10 different countries. Currently, the College offers clinical placements as part of their undergraduate nursing program to: Australia, Finland, the Philippines, and Tanzania, however only Finland and Australia are reciprocal. Typically the clinical and cultural placements have been between five to twelve weeks. Since 1998, the College has facilitated outgoing placements to over 300 nursing students and hosted clinical placements to over 50 incoming nursing students. In 2013, faculty from the University of Saskatchewan formed as an International Research Group (IRG) to conduct research around the study abroad student experience. The first study, launched in 2013 , was a five-year longitudinal Study Abroad Survey of Factors Influencing Student Decisions to Study Abroad. This research is IRG’s second project, Long-Term Self-Reported Impact of Study Abroad on Nursing Practice in Canada, funded in 2016 by the Western and North-Western Region Canadian Association of Schools of Nursing (WNRCASN).

Instrument: International Education Survey (IES): In the mid-1990s, CeCelia Zorn, PhD, RNC developed and tested the IES tool. The survey has since been used in both short-term and long-term analyses and with nursing and non-nursing students When students have the opportunity to study abroad, the experience affects multiple dimensions. Relative to the long-term impact on nursing practice, research to date on the short–term impact of study abroad can be summarized in the IES framework of: personal development, professional development (including cultural competence), global perspective, and intellectual development.

Reason for the study: Although study abroad clinical placements are offered in almost half of Canadian nursing programs, the long-term impact on nursing practice in Canada has yet to be explored, despite widespread recognition that internationalization of the nursing curriculum is essential to prepare the nurse professional for the rapidly changing challenges of the 21st century. While there has been a significant amount of research assessing the beneficial short-term impact of study abroad, there is little research exploring the narrative perceptions of how such experiences affect participants’ nursing practice over the long-term.

Research question: What is the long-term impact on nursing practice of study abroad experience during the undergraduate nursing program, from the perspective of RNs in Canada?

Ethical approval: A certificate of approval was granted from the University of Saskatchewan Research Ethics Board.

Methods: Invitations were sent to 168 alumnae registered nurses (RNs) to participate in a study to explore the long-term impact of study abroad on nursing practice. A descriptive survey design included categorical, structured and open-ended questions constructed to elicit narrative responses. The survey respondents were additionally invited to participate in an interview to capture rich data to further explore the impact of study abroad. The International Education Survey (IES), adapted to net responses to the quantitative questions, was hosted on Campus Labs, an online survey platform. Interpretive description qualitative methodology analyzed the comments to the open-ended survey and the interview questions, while descriptive statistics reported findings from the categorical questions.

Limitations: Study limitations were: small sample size therefore study findings cannot be generalized beyond this research; limitation to baccalaureate degree graduates only; and, the possibility of self-selection, with students having a more positive experience being more willing to complete and return the survey when requested. Unlike the limitations of previous studies using the IES tool: the student experience was not confined to a single destination country; a replication of this study in the near future in Australia will serve as a comparison group with which to further validate the reliability and validity of the survey tool; and in addition, while previous studies have been descriptive in nature, this study added the results of additional rich data from separate qualitative interviews.

Results: In May 2016, 168 RN alumnae of the SA program were contacted, 35(21.7%) completed the survey, and 13 alumnae RNs additionally agreed to an interview. The data analysis was completed by the end of the year; results of the study will be reported at the STTI conference in 2017.

Conclusion: The 'long-term' impact of study abroad experiences researched to date have been from nursing programs who offered a single clinical placement mainly in a developing countries, but rarely from nursing programs who offered study abroad placements to a variety of both developing (countries in Africa, Asia, South America) and developed countries (Australia, United States, and countries in Europe). The researchers believe this is the first study to look at the perceived long-term impact of study abroad on participants’ nursing practice in Canada, and the first study to compare the impact on practice from placements in both developed and developing countries. While research from study abroad experiences in developing countries provide a significant cultural contrast for nursing students from a developed country like Canada, nursing practice experiences in countries of similar economic development and with a unique Indigenous population provide unique and insightful outcomes. Outcomes may help justify the costs to students and time invested by the program and by the University, as to whether the study abroad program is beneficial to the nurse as a practitioner, and to the system as a whole.