The Influence of Multimorbidity on Rehabilitation Outcomes in Stroke and Amputation 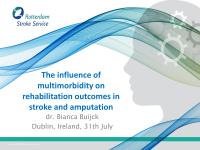 The citations below are meant to be used as guidelines. Patrons must make any necessary corrections before using. Pay special attention to personal names, capitalization, and dates. Always consult appropriate citation style resources for the exact formatting and punctuation guidelines.
Item Information
Item Link - Use this link for citations and online mentions.
http://hdl.handle.net/10755/621923
Abstract

The Geriatric Rehabilitation in AMPutation and Stroke (GRAMPS) study is a prospective, multicentre, cross sectional study in 15 SNFs. Univariate, and multivariate logistic and linear regression analyses were used to identify multimorbidity as independently related determinant of rehabilitation outcomes, such as postural imbalance (for stroke), and prosthetic use and timed-up-and-go test (for LLA).

Being able to ambulate independently, and having a transtibial amputation (rather than a higher level of amputation), without phantom pain, determined prosthetic use (R2=56%), while cognitive abilities, low amputation level, and pre-operative functional abilities were independently associ­ated with the timed-up-and-go test test (R2=82%).