Empowering nursing through evidence: Putting evidence-based practice back in the classroom 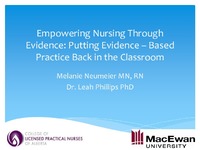 The citations below are meant to be used as guidelines. Patrons must make any necessary corrections before using. Pay special attention to personal names, capitalization, and dates. Always consult appropriate citation style resources for the exact formatting and punctuation guidelines.
Item Information
Item Link - Use this link for citations and online mentions.
http://hdl.handle.net/10755/621880
Abstract

Using evidence to inform practice is essential to ensure safe, quality care in all areas of nursing. In Canada, Registered Nurses (RNs) and Licensed Practical Nurses (LPNs) are required to engage in evidence informed practice as an entry to practice competency (CCNRN, 2012, CCPNR, 2013). However, despite this expectation, and research findings that nurses generally have a positive attitude toward evidence-based practice (Yoder, et al, 2014) globally there is poor uptake in the application of this process.

Thiel and Ghosh (2008) conducted a cross-sectional survey of 121 practicing nurses in the Midwestern United States to determine how they accessed information and their readiness to engage in evidence-based practice. Results of this survey concluded that while 75% of nurses indicated they were familiar with evidence-based practice processes, only 24% stated they used a health database like CINAHL when they needed information. The majority of respondents (72.5%) indicated instead that they used nursing colleagues and peers as their primary source of practice information. A similar study conducted in Ireland by O’leary and Mhaolrunaigh (2011) to examine the information seeking behaviours of practicing nurses found again that most nurses accessed other people, especially their colleagues when seeking information and making decisions on care. Yoder et al (2014) conducted a survey of 1112 practicing nurses in the United States to determine what types of knowledge RNs working in the hospital system use in their practice and to what extent they utilize research findings. Their results showed little difference from previous studies. Only 11% of respondents stated that they did not know very much about EBP. However, when asked about how they access information in practice 75% of nurses surveyed stated they relied on personal experience as their primary source of knowledge and only 23% noted using nursing research journals. When asked about how they accessed nursing information on-line, 71% stated they used Google while less than half (45%) reported using databases like CINAHL or MEDLINE. This evidence clearly outlines a ‘gap’ between the expectation of EBP and the actual implementation of EBP.

Recognizing that our nursing population was also experiencing a gap between the expectation and implementation of EBP, we looked to the literature to examine the barriers that prevent nurses from engaging in EBP. The most common barriers identified by nurses were a lack of time and a lack of skill (Chang & Crowe, 2011; Hewitt-Taylor, Heaslip, & Rowe, 2012, Majid, et al, 2011, Wallin, Bostrom, & Gustavsson, 2012). In their study of 1,486 practicing nurses in Singapore, Madji et al (2011) found that nurses had limited skills in searching the literature and understanding the evidence. The majority of nurses were unable to adequately perform search strategies for given nursing topics and less than 25% were familiar with Boolean operators. In addition to the lack of literature searching skills, the nurses in this study also indicated that inadequate understanding of statistical terms and research jargon limited their ability to engage in EBP. These nurses indicated that additional training in EBP skills would help them to implement EBP. Hewitt-Taylor et al. (2012) in their study of Finnish nurses noted that nurses lacked confidence in their ability to use research in practice. They suggested that interventions to support EBP implementation should focus on helping practicing nurses develop the skills required to understand what makes research usable by focusing on the process of deciding what information is needed, searching for this information, and then evaluating the utility of that information. Chang and Crow (2011) noted that nurses had limited confidence in their ability to find, appraise, and then implement evidence into their clinical practice, but that exposure to education on EBP enhanced nurses’ self-efficacy in engaging with EBP. This finding is supported by a study of 1,256 Swedish nurses that noted that the nurses with the highest levels of EBP capability beliefs used research findings in practice more than twice as often and engaged in the implementation of evidence seven times as often as those with lower capability beliefs (Wallin et al, 2012).

In order to improve EBP implementation in Alberta, we created an accessible education program that targets essential EBP skills. This program emphasizes the development of practitioner self-efficacy, and the utility of research to practice. The program consists of a series of three interactive webinars designed to increase nurses’ skills in EBP and their self-efficacy for carrying out those skills in practice through a strong clinical focus. This focus on clinical versus academic application of EBP skills helps demonstrate the relevance and utility of research for practice and enhances the real-world application of EBP for practicing nurses (Christie, Hamill, & Power, 2012). The webinars were evaluated using a pre-test/post-test design and statistically significant improvements were reported for each webinar in the targeted learning areas. This webinar series remains available to practicing nurses and is currently housed on the CLPNA website and on the Global Health Network.

Despite the success of the webinar series it is important to acknowledge that individual skill building supports only one part of the equation, and to create a culture of evidence-based practice, overall educational and system changes must also occur. Following the PRECEDE/PROCEED framework, we collaborated with Alberta institutions that offer the LPN program to determine what their needs are for embedding EBP skills into the LPN curriculum. A focus group was held with key participants from the educational system and then a survey was sent out to educators across the province. Data on the predisposing, enabling, and reinforcing factors affecting EBP interventions in curriculum were gathered. This data was used in collaboration with a partner school to develop, pilot test, and implement an EBP intervention that embeds EBP skills within the nursing curriculum.