Other Title(s)
Children in the Intensive Care Unit 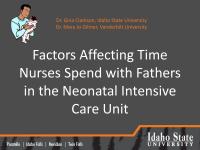 The citations below are meant to be used as guidelines. Patrons must make any necessary corrections before using. Pay special attention to personal names, capitalization, and dates. Always consult appropriate citation style resources for the exact formatting and punctuation guidelines.
Item Information
Item Link - Use this link for citations and online mentions.
http://hdl.handle.net/10755/621856
Abstract

Purpose: The aim of this exploratory study was to describe factors affecting the amount of time neonatal intensive care unit (NICU) nurses spend with fathers. Background and Rationale. Family-centered care (FCC) is considered an important standard of practice in NICUs worldwide and research has been conducted in many countries such as Japan, Sweden, Canada, Germany, Iran, United Kingdom, Czech Republic, Taiwan and Australia (Asai, 2011; Blomqvist, Rubertsson, Kylberg, Jöreskog, & Nyqvist, 2012; Feeley, Waitzer, Sherrard, Boisvert, & Zelkowitz, 2013; Garten, Nazary, Metze, & Bührer, 2013; Hadian Shirazi, Sharif, Rakhshan, Pishva, & Jahanpour, 2015; Hugill, 2014; Jakšová, Sikorová, & Hladík, 2016; Lee, Wang, Lin, & Kao, 2013; Trajkovski, Schmied, Vickers, & Jackson, 2012). Family-centered care has been shown to be important to outcomes of infants and families (Maria & Dasgupta, 2016; Williams, 2016). Although nursing practice related to FCC has been studied with both parents (Asai, 2011; Trajkovski et al., 2012), NICU nurses have not previously been asked about how they spend time specifically with fathers. Fathers report NICU staff to be a great source of support (Feeley et al., 2013; Garten et al., 2013) but evidence suggests paternal visitation declines over the length of hospital stay (Clarkson, 2016; Garten, Maass, Schmalisch, & Bührer, 2011) making less time available for nurses to provide FCC to fathers. Fathers desire to be involved and report increased comfort with their infants with increased involvement (Blomqvist et al., 2012) but also report reluctance to be involved without support (Feeley et al., 2013). Therefore, it is important to evaluate factors which affect the amount of time nurses are able to spend with fathers during their visits.

Methods:  This study used a descriptive design and an investigator-designed survey with open-answered questions. The setting was a NICU in a large urban teaching facility at a children’s hospital in the southeast United States which employed 274 nurses. Results presented here were part of a larger survey. A formal IRB exemption was obtained prior to data collection. Neonatal nurse practitioners (NNPs) were excluded due to their provider role. The data was collected anonymously using an online survey. Invitations to participate were sent to all the nurses via emails by the unit assistant manager.

Results: Overall, 94 nurses participated (34% response rate). Demographic information showed most were bedside nurses (N=75, 79.8%) who worked full-time (N= 84, 90.3%) day shift (N= 53, 57%). Most were Caucasian (94.5%) women (98.9%) with bachelor's degrees (63.8%) who were married (65.9%). Median years worked in a NICU were 8 (range of <1 to 40). Median years of nursing experience were 10 (range of < 1 to 52). Age ranged from 23 to 72 years (M=39.6, SD=12.89). Out of the 94 participants, 65% (N=61) provided data for qualitative analysis. Content analysis of the data was conducted by two researchers with expertise in FCC and care of neonates and demonstrated 91.7% overall interrater reliability. Theme categories included nurse factors, father factors, mother factors and infant factors. Subthemes for nurse factors included work flow, equal educator, focus on mother, focus on father, promotion of family bonding and nurse as gatekeeper. Subthemes for father factors included confidence, motivation, level of competence, beliefs, attitudes and availability. Subthemes for mother factors included culture and maternal gatekeeping and subthemes for infant factors were level of illness and tolerance to activity.

Conclusion:  Results show that although nurses indicate spending time with fathers in the NICU is important, many factors reduce the quantity and quality of that time. These results help to identify factors which may be modified or moderated by nurses or administration and can be used to help improve nursing knowledge and practice of family-centered care in NICUs worldwide.