A Retrospective Descriptive Study of Chemically Impaired Nurses in Texas

Other Title(s)
Challenges in Substance Abuse 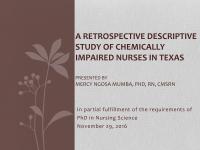 The citations below are meant to be used as guidelines. Patrons must make any necessary corrections before using. Pay special attention to personal names, capitalization, and dates. Always consult appropriate citation style resources for the exact formatting and punctuation guidelines.
Item Information
Item Link - Use this link for citations and online mentions.
http://hdl.handle.net/10755/621812
Abstract

Purpose:  The purpose of this study was to describe the population of nurses with impaired practice in the state of Texas going through a peer assistance program between 2013 and 2016.

The lack of education and screening for substance abuse, negative attitudes towards substance abuse, and the stigma associated with mental illness have further exacerbated this problem (Darbro & Malliarakis, 2012). Furthermore, very few interventional studies have been conducted on nurses with impaired practice. This is partly due to the complexities involved with studying nurses with impaired practice, specifically when considering confidentiality problems and maintaining anonymity of these nurses.

Consequently, very little is known concerning the characteristics of nurses with impaired practice, especially those going through peer assistance programs. Few recent studies have aimed at comprehensively describing this population, including their recent prevalence, demographic characteristics, and interventions specific to nurses in order to promote recovery and reduce relapse rates. In Texas, no studies were found in the literature that addressed the aforementioned concerns. Before any specific interventions can be recommended, a clear picture of who these nurses with impaired practice are is needed

Methods:  This study was a retrospective analysis of secondary data of nurses who are chemically impaired collected by TPAPN between January 2010 and October 2016. It included both associational and comparative designs. Associational design was used to examine the strengths of relationships among variables, as well as to predict the behavior of one variable based on how another variable was acting. A comparative design was also used to answer research questions that examined differences between groups but lacked an active independent variable.

Results:  Currently, 348 nurses in TPAPN are actively participating in the program for substance abuse related offenses. Many nurses are also referred to the program are for dual diagnoses. Of all the nurses that were referred to TPAPN over the last six years, 1553 were specifically for substance abuse related problems. These represent two percent of the population of nurses in Texas. The average age of participants in this study was 40.1 years, and approximately half of them were under the age of 40. Females represented 75% of participants and 76% were registered nurses. About 32% relapsed while they were in the program, and about 41% successfully completed the program. Nurses with impaired practice abuse variety of substances including prescription drugs and illegal drugs. Opioids were the most frequently abuse class of drugs, followed by alcohol, and then stimulants. The majority of nurses obtained their drugs by diverting from patients. Contrary to what is in the literature, nurses working in long-term care, medical-surgical units, and home health care had the highest prevalence of impaired practice. In this study, psychiatric comorbidity was not significantly associated with relapse. Self-report status was significantly associated with gender, age category, license type, relapse, and drug of choice. There was a significant inverse relationship between time it takes to enroll and number of days abstinent. Men were also more likely to be employed while in the program compared to their female counterparts. Of the twelve-predictor variables used in Cox Regression analysis, only two were significant predictors of relapse among nurses with impaired practice in TPAPN. These two predictors were (a) having substance use disorder as the referral type and (b) having alcohol as the primary drug of choice

Conclusion: A significant number of nurses still suffer from substance use disorders. From the results of this study, it is evident that the prevalence of susbstance abuse among nurses is higher than what is traditionally reported. Also, only a small percentage of nurses report themselves to the peer assistance programs. This who report themselves see to have better outcomes and thus, self-report should be encouraged.