Purpose:  It was previously believed that DE primarily affects women and the vast majority of DE research focused on females. However, recent studies have suggested that DE symptomatology (emotional, restrained and emotional eating) may be underestimated in the male population. Indeed, over the last decade, it was revealed that a substantial number of men suffer from DE and ED (Eating Disorders) (Striegel et al., 2012; Strother et al., 2012), and that up to 25% of all individuals with ED are males (Hudson et al., 2007). Moreover, a recent review paper revealed that 42-45% of individuals engaging in binge eating were males; as were 28-100% of individuals who regularly purged. Laxative abuse among genders was nearly even, and fasting for weight loss was endorsed by nearly 40% of the males (Mond, Mitchison & Hay, 2014). This is the first study to investigate psychosocial predictors of DE in a sample of Middle-Eastern males, thus findings will provide prevalence data about DE behaviors in this context. The present study examined depression as a potential mediator of the relationships between body image dissatisfaction, strategies to change muscle and weight, media pressure, and DE in male young adults. Based on findings from the literature, it was hypothesized that: BID will be indirectly associated with DE through depression (Hypothesis 1); Strategies to change muscle and weight will be indirectly associated with DE through depression. (Hypothesis 2); Media influence (MI) will be indirectly associated with depression and DE (Hypothesis 3).

Methods:  This is a cross-sectional design study. After obtaining the ethical approval of the university IRB, which is constituted in accordance with the US Code of Federal Regulation (45CFR 46.107, 21CFR 56.107), and Good Clinical Practice ICH (Section 3), a convenient sample of 260 male undergraduates aged between 17 and 33 was asked to participate voluntarily in the study and completed a self-reported questionnaire. Confidentiality and anonymity were ensured. Data was collected during class time and testing sessions lasted around 35 minutes. Each student received a survey pack with an informed consent.

Conclusion:  To our knowledge, the present study is the first to explore the psychosocial predictors of DE in a sample of Middle-Eastern males and to explore the mediating effect of depression on DE.  Our results will assist in the development of prevention and intervention programs targeting the roots of DE, and ultimately eating disorders. Specifically, nurses could assess psychopathology indicators, and in particular depressive symptoms in males, once they detect that strategies to lose weight are being applied, as a preventive measure against distorted eating. Clinically, it is important to pay attention to behaviors among males that aim at becoming thinner through a change of eating patterns, food choice, and exercise. Such behaviors are indicative of worry and concern about losing weight, which can lead to negative feelings (especially if the behaviors are ineffective, or the individual has the intention but is unable to consistently apply those strategies to decrease weight), Those feelings can, in turn, result in emotional eating, which is ultimately a risk factor for eating disorders (Fairburn, Cooper, Doll, & Davies, 2005). In addition, findings from this study bring attention to the impact of media and importance of restructuring the perceptions of an “ideal” male figure that directly impacts males’ emotional functioning, which reflects in emotional eating patterns. These findings have special relevance for the Lebanese context. The region is in need of centralized efforts towards providing holistic health care to males at risk of developing DE habits. A multidisciplinary approach is needed, whereby psychologists, public health and nursing professionals, as well as nutritionists can join efforts to detect, assess, and treat DE behaviors. 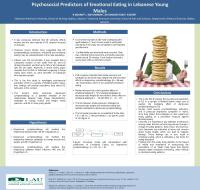 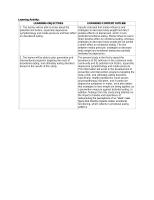 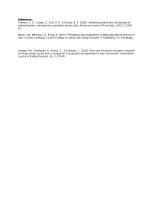