Other Title(s)
Influences on Test Taking in Nursing Education 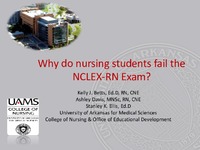 The citations below are meant to be used as guidelines. Patrons must make any necessary corrections before using. Pay special attention to personal names, capitalization, and dates. Always consult appropriate citation style resources for the exact formatting and punctuation guidelines.
Item Information
Item Link - Use this link for citations and online mentions.
http://hdl.handle.net/10755/621612
Abstract

Problem/Purpose: Each year a small cohort of graduates from the UAMS CON BSN Program graduate and do not pass the NCLEX-RN® Exam on the first and subsequent attempts. The purpose of this study was to evaluate graduates from the last four years who have not been successful on the first or subsequent attempts at the NCLEX-RN® Exam to assess if there are certain trends or patterns that occur while they were in the BSN program that may have contributed to their NCLEX-RN® Failure. Identification of trends can help BSN faculty better provide academic support to students once it is understood what factors may be causing the negative outcomes.

Significance: Being able to identify trends in social and academic behaviors that lead to not being successful on the NCLEX-RN® Exam after graduation will allow faculty and academic coaches in the UAMS CON to implement early identification and remediation strategies that will better prepare students for the NCLEX-RN® Licensure exam. Findings will disseminated to other academic educators via abstract submission and publication of a manuscript.

Assumptions-Anecdotal evaluation of students who have historically not been successful on the NCLEX-RN® exam have exhibited academic risk factors throughout the nursing program. However, a statistical data analysis has not been performed to find out if there is indeed a significant relationship between NCLEX-RN® failures, and those who have performed poorly on the TEAS V Admission Exam, the RN Predictor Exam, and the Critical Thinking Exam. Our experience as faculty have taught us that some students who come into the program and struggle with the standardized exams and not meet the benchmarks have required several academic coaching sessions and remediation in nursing content to help them improve repeated standardized testing. Anecdotal feedback from the academic coach has also proposed that social and personal factors can also play a key role in students who are at academic risk while in the nursing program. For years, nursing faculty and administrators have tried to find the best models for predicting NCLEX-RN® success, but there continues to be a knowledge gap as to what that module truly looks like. Many studies have been published that have given information related to success predictors such as pre-admission testing, admission GPA, and benchmarking exams during the program, but have lacked the ability to determine an exact science. Of late, one particular study by McCarthy et al (2014) studied what were the predictors of NCLEX-RN® success by evaluating pre-nursing versus nursing aptitude scores from the ATI TEAS V, and various standardized exams students complete throughout their nursing program. The results revealed significance for almost all academic variables with the NCELX-RN®. There was a strong correlation between academic and nursing aptitudes. Students who scored high on predictor variables identified (pre-nursing GPA, TEAS Reading, TEAS Math, TEAS Science, and TEAS English) also scored high on ATI Fundamentals, ATI Medical Surgical, ATI Nursing Care or Children, ATI Mental Health, and ATI Maternal Newborn exams. It also concluded that TEAS and GPA sub-scores were also good predictors of success. Another study by Abele, Penprase and Ternes (2013) evaluated undergraduate prerequisite and nursing courses that may serve as predictors of success for students completing a BSN program and sitting for the NCLEX-RN® Exam. The students evaluated in this study were on academic probation and at risk students and failed at least one pre-nursing or nursing course. The most common courses failed pre-nursing were the biological sciences and the medical surgical and psychiatric mental health courses in the nursing program. The results revealed that those students failing two or more courses (pre-nursing and nursing) were less likely to complete the program.

Methodology-This study combined quantitative descriptive analysis and face to face interviews with thematic analysis as a mix-methods approach. Subjects/Setting-Graduates who failed the NCLEX-RN® Licensing exam from May 2012-May 2015 were identified using the UAMS College of Nursing’s (UAMS CON) academic database. The sample of graduates were evaluated from the May or December graduating classes in the years of 2012-2015. The study interviews took place at the University of Arkansas for Medical Sciences College of Nursing. The students are graduates of the BSN program and have taken at least 1 attempt of the licensure exam. Instrument-The quantitative portion of the study was a retrospective review of academic test scores and demographic using the ATI database and student records. The qualitative methods used a semi-structured interview guide during interviews to capture graduate feedback. Procedure-The study was approved by the University of Arkansas for Medical Sciences Investigational Review Board. Graduates who did not pass the NCLEX-RN Licensing exam over the last 5 years (May 2012-May 2016) were identified. Once identified, retrospective review of their academic performance while in the BSN program was reviewed: TEAS V Scores, ATI Critical Thinking Exam Scores, ATI RN Predictor Scores, Demographic data, admission GPA, Graduation GPA and Number of academic coaching sessions attended while in the program. Graduates who did not pass the NCLEX RN Exam were contacted by the investigator and asked to participate in a face to face interview that asked questions regarding the topic of why they felt they were unsuccessful on the NCLEX-RN Exam. An interview guide was used to collect qualitative data. Each interview was recorded and transcribed word for word into an interview script after obtaining the participant’s permission. Thematic analysis was used to determine major themes in the data. Data Analysis-Quantitative data analysis consisted of descriptive statistics (frequencies, means, and standard deviations as appropriate) identifying student demographic data related to sex and race and academic demographic data consisting of admission cumulative GPA, Graduation Cumulative GPA, and admission TEAS V Exam Score(s). Data using face to face interviews and thematic analysis of interview narratives for each participant was used to identify themes throughout each interview that may help the researcher understand situational, social, and environmental factors that may have contributed to the negative outcomes of NCLEX-RN failure for each student. Results- Graduation GPA was much lower than entrance GPA, Average TEAS V Scores were 66.8 (lower end of average) and mean Comprehensive Predictor Scores were 69.7 (N=43). Thematic Analysis indicated that major risk factors included length of time from graduation to testing date, lack of preparation for the licensure exam, and differences in the testing environment in the program versus NCLEX-RN testing environment.