Other Title(s)
Quality of Life in Cardiac Patients 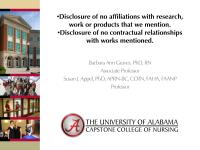 The citations below are meant to be used as guidelines. Patrons must make any necessary corrections before using. Pay special attention to personal names, capitalization, and dates. Always consult appropriate citation style resources for the exact formatting and punctuation guidelines.
Item Information
Item Link - Use this link for citations and online mentions.
http://hdl.handle.net/10755/621515
Abstract

Purpose: Cardiovascular disease (CVD) is the leading cause of death and chronic illness in the US. The burden of CVD is substantial in terms of mortality, disability, and cost. More than 82 million Americans have some type of CVD.1 Total direct medical costs are projected to triple, from $273 to $818 billion, between 2010 and 2030.2 More women die from CVD than men, but still represent an under-researched population.3-5 Africian-American women experience some of the highest age-adjusted prevalence rates for heart attack, stroke, hypertension, and diabetes. The purpose of the research study was to compare CMR or the interplay of risk for diabetes leading to heart disease, between African-American and Caucasian women.

Methods: A cross-sectional design was used to compare CMR variables in 50 women (25 African-American and 25 Caucasian) participants in a worksite wellness program. CMR profile data was obtained that included: 1) blood levels of fasting insulin and glucose (blood sugar), hemoglobin A1c (risk for diabetes), C-reactive protein (inflammation), 2) acanthosis nigricans scoring (darkened skin on the neck as risk for diabetes) and 3) Measures of body habitus (weight, height and waist circumference). A multivariate analysis of covariance (MANCOVA) was used to compare African American and Caucasian participants on the CMR variables while controlling for age and BMI. A regression analysis using a stepwise procedure was also used to determine which CMR measures were the best predictors of insulin resistance.

Conclusion: Findings from this study provide valuable insights to guide the development of specific interventions to reduce CMR among understudied women in general. More specifically, findings inform how to tailor interventions among African-American women, as risks for heart disease and stroke have been found to differ by both gender and race.