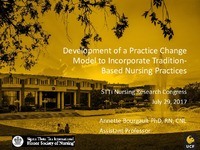 The citations below are meant to be used as guidelines. Patrons must make any necessary corrections before using. Pay special attention to personal names, capitalization, and dates. Always consult appropriate citation style resources for the exact formatting and punctuation guidelines.
Item Information
Item Link - Use this link for citations and online mentions.
http://hdl.handle.net/10755/621426
Abstract

Purpose: The purpose of this study was to explore factors influencing the use of tradition-based practices and create a model of de-implementation processes to facilitate adoption of evidence-based practice in the critical care setting. This presentation is aligned with the conference objective of discussing research strategies to promote evidence-based teaching and learning influencing interprofessional environments.

Results: The sample consisted of 22 critical care nurses; 4 of the participants were in formal leadership roles and 18 were staff nurses. Nursing experience ranged from 1-39 years (M=10) and 17/22 (77%) of participants held a BSN or higher degree. The major theme that emerged during secondary data analysis was uncertainty of the scientific underpinnings of clinical nursing practice. Participants were unsure if their practices were based solely on tradition, evidence, or a combination of sources and most were unable to define and/or identify a tradition-based practice. Uncertainty then became the core concept in our new model for practice change. “Desire to know” was the primary mediator between uncertainty and de-implementation of tradition-based practices and implementation of evidence-based practices. Sources of information to satisfy desire to know and relieve uncertainty included professional organizations, nursing leadership at the unit level including the Unit Practice Council, and previous knowledge acquired from formal nursing education. Additional mediators to de-implementation of tradition-based practices were identified as secondary facilitators and barriers. These facilitators, such as use of a Gemba visual management board and identified barriers to practice change, influenced both de-implementation and implementation processes.