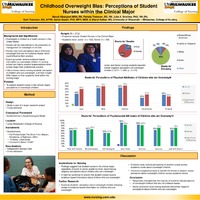 The citations below are meant to be used as guidelines. Patrons must make any necessary corrections before using. Pay special attention to personal names, capitalization, and dates. Always consult appropriate citation style resources for the exact formatting and punctuation guidelines.
Item Information
Item Link - Use this link for citations and online mentions.
http://hdl.handle.net/10755/621371
Abstract

Purpose: To explore bias among student nurses within the nursing major regarding overweight children.

Setting: College of Nursing at a large Midwestern University in an urban setting.

Methods: A descriptive, cross-sectional study was conducted with students (N = 213) at the junior (n = 104) and senior (n = 109) levels of the nursing majors. Participants completed a survey regarding their perceptions of overweight children.

Conclusions: Responses indicated that the majority of students had misconceptions about overweight children.

This work has been approved through a peer-review process prior to its posting in the Virginia Henderson Global Nursing e-Repository.