Disaster has almost become a household word in America and around the world. Disaster Preparedness provides some since of control over the effects of disaster, however small that may be.  The National Response Framework provides the structure under which all disasters are managed domesticallly (Veenema, 2013).  It is scalable and flexible - having the ability to accomodate any disaster, from the smallest incident to a disaster of national proportions (http://emilms.fema.gov//IS700aNEW/index.htm; http://emilms.fema.gov/IS800Bindex.htm).  Preparedness determines the degree of service disruption regardless of the nature of the disaster.  The goal of preparedness within any entity is to expect the unexpected, prepare beforehand, and integrate this preparedness within the context of the community disaster plan.  Only when this is accomplished will losses be mitigated.

In the spring of 2011, the United States experienced the largest tornado related event in our Nation's history.  During that three-day period and across five states, the Centers for Disease Control confirmed that 58% of the fatalities were female (MMWR, 2012).  Aware of these statistics, the Federal Government views populations comprised of women and children as high-risk, high-vulnerability (Veenema, 2013).  Under ordinary circumstances in a disaster, the special needs of pregnant women and infants should be addressed in order to minimize excess neonatal and maternal mortality (Veenema, 2013).  Disaster compounds ill effects on an already marginalized population - crisis pregnancy with its social, emotional and physiologic components.

High-risk, high-vulnerability populations refers to people who have both a higher probability of being exposed to disaster and face challenges to anticipate, cope with, resist, and recover from a disastrous event (Veenema, 2013).  Included among those most at risk to adverse impacts and disaster are women and children.  The United Nations International Strategy on Disaster Reduction states that, in both developing and developed nations, women and children are fourteen times more likely to die than men during a disaster (http://www.unisdr.org).  At risk people generally have reduced access to vital economic and social resources, limited autonomy and power, and have low levels of social capital (Barnshaw &Trianor, 2007; Morrow, 1999).  Historically, disaster exacerbates existing social, political, historical, and economic circumstances that marginalize populations - those often unaccounted for in disaster preparedness and mitigation efforts (Runkle et al., 2013).  Disparities in helathcare system access during the recovery phase may contribute to inequities in health outcomes in those populations affected by disaster, which further marginalize vulnerable subgroups.  Excess patient demands on the healthcare system after disaster promote lack of continuity and disruptions in access to primary care and make the system vulnearble to a seperate public health emergency (Manley et al., 2006; Gursky, 2004; Schur, 2004).

Vulnerability of people and places is a complex phenomenon.  Vulnerability can be defined as the inner conditions of a society that make it liable to experience harm and damage (Birkman, 2005).  The ability to measure vulnerability is an essential component of risk reductiona and the promotion of a culture of disaster resilience (Birkman).  Disaster can be defined as a complex interaction that exists between a potentially damaging physical event and the vulnerability of a society - its infrastructure, economy, and environment that are determined by human behavior (Birkman).  According to the United Nations (2005), the starting place for preparedness lies in the knowledge of hazards and the physical, social, environmental, and economic vulnerabilities to disaster that most societies face.  Villagran de leon (2001,2004), places vulnerability within a "risk triangle" framework, thereby viewing risk as a relationship between vulnerability, hazard, and disaster preparedness.  It is through this process of identifying vulnerabilities, prioritizing hazards, and addressing deficiencies in preparedness that risk can be mitigated, response can be appropriate, and recovery can occur (Veenema, 2013).

Coordination is a cintral component to the National Response Framework's goal of saving lives (Uddin et al.,2011).  Based on research findings - a lack of coordination preparedness for an extreme event results in greater loss of life and econoic impact regardless of whether the disaster is naturally occurring or man-made (Ussin et al.).  An emergency disaster preparedness plan is considered a necessary precondition for appropriate response.  Networkig among organiztions provides opportunities to share information across organizational boundaries and these relationships play into how emergency preparedness plans are rehearsed.  Therefore, establishing relationships with the emergency disaster community ("tie strength") allows an organiztion to rehearse emergency protocols more regularly and accurately, thereby increasing success in real-life situations.

Disasters may be caused by a variety of man-made or natural events; however, it is not the type or magnitude of the event, but its impact on human populations, that makes an event a disaster (Veenema, 2013).  Disasters are not measured by hurricane category, seismic intensity, or bioterror agent category, but by the constellation of acutual harm sustained by individuals and community.  Empowerment systems for human services in disaster are designed to promote stabilization and viability on the community as well as self-sufficiency and human security at the individual and family level.  It is necessary that nurses predict potential human services issues and develop and implement (when needed) the community's emergency managment plan related to human services.

As national disasters continue to impose difficulties nationwide and as disaster becomes a visual image (e.e.911; the Boston Marathon bombings), the pressing need for preparedness will become increasingly eviden.  Addressing preparedness in a vulnerable population can only be positive - if one agency is prepared, or one group of agencies with a community is prepared, or perhaps one target group within a region - then lives will be saved.  It is the desire that this project though just one small segment of a population with a community, will provide a catalyst for realization that it is the responsibility of society at large to meet the needs of the vulnerable among us.

Popular Works for Marcum, Catherine A. by View 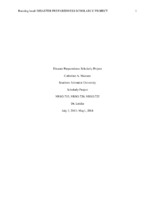 Except where otherwise noted, this item's license is described as http://creativecommons.org/licenses/by-nd/4.0/
Advanced Search