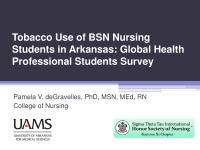 The citations below are meant to be used as guidelines. Patrons must make any necessary corrections before using. Pay special attention to personal names, capitalization, and dates. Always consult appropriate citation style resources for the exact formatting and punctuation guidelines.
Item Information
Item Link - Use this link for citations and online mentions.
http://hdl.handle.net/10755/617352
Abstract
Session presented on Thursday, 21 July 2016. Tobacco use is the single most preventable cause of premature death and disease in the world. Yet, globally 16% of all nurses smoke and use other tobacco products (Shafey, Ericksen, Ross, & Mackay, 2009; Ericksen, Mackay & Ross, 2012; World Health Organization, 2009). Nursing students use tobacco products worldwide, at a rate that often exceeds that of other health care professional students, with a prevalence ranging from 13% - 48%, depending upon the country (Sarna, Bialous, Sinha, Yang, & Wewers, 2010; Warren, Sinha, Lee, Lea, & Jones, 2009). When nursing students continue to use tobacco in their nursing careers, it poses three distinct problems: (a) the nurse's personal health is endangered (Sarna, Bialous, Cooley, Jun, & Feskanich, 2008); (b) the public image and role of the nurse are compromised; and (c) nurses are not working to their full potential to help themselves and others quit using tobacco products. To develop strategies to target this critical problem, it is imperative to gain a comprehensive understanding of tobacco use by this vulnerable population. However, the Global Health Professional Students Survey (GHPSS) had not previously been used in the United States to measure the prevalence and factors associated with tobacco use among nursing students (personal communication CDC Office on Smoking and Health, Dec. 13, 2011). Therefore, the purpose of the study was to: 1) determine the feasibility of using the suggested methodology of the Global Health Professional Students Survey (GHPSS) in BSN Nursing programs in Arkansas, 2) establish a baseline of tobacco use, exposure to second hand smoke, attitudes about nursing's role and knowledge of current tobacco control measures, curriculum/training and demographic data among third year nursing students in Arkansas; and 3) identify factors associated with their tobacco use. Methods: This descriptive, cross-section statewide study used a standardized, self-administered survey developed by the World Health Organization (WHO) and the Centers for Disease Control and Prevention (CDC) and the Canadian Public Health Association (CPHA) with defined sampling procedures and methodology. All BSN programs in Arkansas (11) were asked to participate. All students meeting inclusion criteria were offered the survey following informed consent during a required nursing class. Descriptive statistics were performed to report demographics and prevalence. Chi square was used to determine the extent of the relationships among seven variables: gender, cigarette use, other tobacco product use, desired nursing specialty, nicotine dependence, role of nurses to advise patients to quit, and other tobacco product Results: School response rate was 73% (8/11) with a student response rate of 99.8% (n=516). Prevalence was 25.6% (n=132) with three mutually exclusive groups of tobacco users identified cigarette users only (48%, n=63), other tobacco product users only (37%, n=48), and dual users (15%, n=20). Students want to be positive role models (99%; n=508) and 91% (n=471) want to advise others to quit smoking but 68% (n=352) are not being taught EBP guidelines. The standardized methodology was feasible in Arkansas with time and geography being surmountable barriers. Gender is significantly associated with tobacco use with smokeless tobacco using males making the greatest contribution to the chi square statistic (p=.001).This population is not heavily dependent on nicotine at this time and it is not significantly associated with their view of the nurse's role to advise tobacco using patients to quit using cigarettes (p=.23) and other tobacco products (p=.32). Tobacco use is associated with four nursing specialties Emergency, (p=.022), Community Health (p= .012), Oncology (p=.001) and Undecided (p=.014). Conclusion: Nursing students want to be positive role models despite tobacco use (25.6%). They desire learning EBP guidelines of tobacco cessation but are not being taught. Tobacco use is not influencing their developing role in tobacco control at this time. This group wants to quit but is not being assisted to do so. The significance to the nursing profession is that understanding this population and their tobacco use offers the nursing community an opportunity to address tobacco use while they are open to the information which will ultimately increase the image of nursing, patient care of tobacco users and the health of our future nursing population. References: Eriksen, M., Mackay, J. & Ross, H. (2012) The Tobacco Atlas (4th ed.). Atlanta, GA: American Cancer Society; New York, NY:World Lung Foundation. Retrieved from :http://www.tobaccoatlas.org/uploads/Images/PDFs/ Tobacco_Atlas_2ndPrint. SaRN L., Bialous, S. A., Cooley, M. E., Jun, H. J., & Feskanich, D. (2008). Impact of smoking and smoking cessation on health-related quality of life in women in the nurses' health study. Quality of Life Research, 17(10), 1217-1227. Sarna, L., Bialous, S.A., Sinha, K, Yang, Q., & Wewers, M.E. (2010). Are health care providers still smoking? Data from the 2003 and 2006/2007 tobacco use supplement-current population surveys. Nicotine & Tobacco Research, 12(11), 1167-1171. doi:10.1093/ntr/ntq161. Shafey, O., Eriksen, M., Ross, H. & Mackay, J.(2009). The tobacco atlas (3rd ed.).Atlanta, GA: Bookhouse Group Warren, C.W.; Sinha, D.N.; Lee, J.; Lea, V.; & Jones, N.R. (2009). Tobacco use, exposure to secondhand smoke, and training on cessation counseling among nursing students: cross-country data from the Global Health Professions Student Survey (GHPSS), 2005-2009. Int. J. Environ. Res. Public Health, 6(10), 2534-2549. doi:10.3390/ijerph6102534
Description
Conference Theme: Leading Global Research: Advancing Practice, Advocacy, and Policy
Repository Posting Date
2016-07-21T18:55:42Z
Notes
Items submitted to a conference/event were evaluated/peer-reviewed at the time of abstract submission to the event. No other peer-review was provided prior to submission to the Henderson Repository.
Type Information
Category Information
Conference Information
Rights Holder