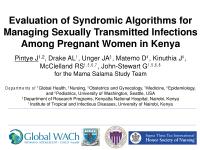 The citations below are meant to be used as guidelines. Patrons must make any necessary corrections before using. Pay special attention to personal names, capitalization, and dates. Always consult appropriate citation style resources for the exact formatting and punctuation guidelines.
Item Information
Item Link - Use this link for citations and online mentions.
http://hdl.handle.net/10755/616511
Abstract
Session presented on Thursday, July 21, 2016: Purpose: Women with Trichomonas vaginalis (TV), Chlamydia trachomatis (CT) or Neisseria gonorrhoeae (GC) during pregnancy have increased risk for adverse obstetric outcomes. Laboratory testing for these sexually transmitted infections (STIs) is often unavailable in resource-limited settings, and pregnant women are managed using syndromic algorithms developed by the World Health Organization (WHO). These algorithms begin with a patient's report of relevant symptoms which triggers a subsequent clinical assessment of signs to inform recommended treatment that will broadly cover likely STIs. We evaluated the diagnostic validity of WHO syndromic algorithms for TV, GC and CT in a pregnant cohort in Kenya. Methods: We used baseline data from a prospective study of peripartum HIV acquisition that enrolled HIV-uninfected pregnant women at two antenatal care clinics in Western Kenya; women with HIV infection detected at enrollment or during follow-up were excluded. All women were interviewed, underwent pelvic examinations by study clinicians and had vaginal and cervical swabs collected for TV, CT, and GC assessment. Laboratory testing for STI diagnosis included wet mount microscopy for TV and nucleic acid amplification tests (NAAT) for GC and CT. In addition, symptomatic women were treated for TV, CT and GC according to WHO and Kenyan national syndromic management guidelines for women with abnormal vaginal discharge and/or vaginal itching. Laboratory-confirmed diagnosis of TV, CT or GC not covered by syndromic treatment was treated at their subsequent study visit. The sensitivity, specificity, positive predictive value (PPV) and negative predictive value (NPV) of syndromic algorithms were calculated compared to laboratory diagnosis as the gold standard. Results: Of 1279 HIV-uninfected women in the overall cohort, 1275 (99%) had complete TV, CT and GC assessment at baseline, and were included in the present analysis. Women enrolled at a median of 22 weeks gestation (interquartile range [IQR] 18-26), median age was 22 years (IQR 19-27), and most were married (78%) and self-reported no prior STIs (94%). Prevalence of any STI was 13%. TV, GC and CT were detected in 6%, 3% and 5% of women, respectively. Overall, 20% of women with STIs reported abnormal discharge compared to 9% of women without STIs (p<0.001); there was no difference in report of vaginal itching among women with and without STIs (12% vs 18%, p=0.079). Among women with any STI, symptoms were commonly reported in women with TV (31%), and abnormal vaginal discharge was more frequently reported than vaginal itching (28% vs. 13%, p<0.001). Among women with CT and GC, 23% and 9% reported symptoms, respectively, and there was no difference in frequency of reported abnormal vaginal discharge and vaginal itching. On clinical exam, abnormal vaginal discharge was found in 18% of women and was found more frequently among women with STIs compared to women without STIs (35% vs 16%, p<0.001). Using a gold standard of laboratory diagnosis of STI (TV, CT, or GC), syndromic diagnosis of any STI (TV, CT, or GC) per clinical exam had a sensitivity of 39% (95% confidence interval [CI] 32%-47%), specificity of 78% (95% CI: 75%-80%), PPV of 21% (95% CI: 16%-26%) and NPV of 90% (95% CI: 88%-92%). Among women who reported abnormal vaginal discharge, which represents an entry point for syndromic management, syndromic diagnosis had a sensitivity of 28% (95% CI: 19-37%), specificity of 92% (95% CI: 74-99%), PPV of 94% (95% CI: 79.2-99.2%) and NPV of 23% (95% CI 15-32%). Syndromic diagnosis also had low sensitivity for individual STIs: TV (51%, 95% CI: 39%-62%), CT (41%, 95% CI: 30%-54%) and GC (22%, 95% CI: 9%-40%). Specificity for individual STIs was similar to estimates for any STI: TV (78%, 95% CI: 75%-80%), CT, (77%, 95% CI: 74%-79%) and GC (76%, 95% CI: 73%-78%). Among 163 women with any STI, 100 (61%) would have been missed without laboratory diagnosis. Conclusion: Among HIV-uninfected pregnant women, STIs were common and syndromic diagnosis had low sensitivity, resulting in missed opportunities for clinical intervention. Novel STI diagnostics are needed to improve Maternal and infant health.
Description
Theme: Leading Global Research: Advancing Practice, Advocacy, and Policy
Repository Posting Date
2016-07-13T11:14:17Z
Notes
Items submitted to a conference/event were evaluated/peer-reviewed at the time of abstract submission to the event. No other peer-review was provided prior to submission to the Henderson Repository.
Type Information
Category Information
Conference Information
Rights Holder