Other Title(s)
How students learn by studying other cultures 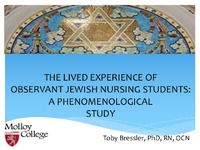 The citations below are meant to be used as guidelines. Patrons must make any necessary corrections before using. Pay special attention to personal names, capitalization, and dates. Always consult appropriate citation style resources for the exact formatting and punctuation guidelines.
Item Information
Item Link - Use this link for citations and online mentions.
http://hdl.handle.net/10755/616510
Abstract

Purpose: As borders become more fluid, demographic shifts create a social imperative that requires nurses from diverse cultural groups to provide quality health care. With expanding cultural diversity in the United States (U.S. Census Bureau, 2009), the Institute of Medicine (2009) recommends that the nursing workforce increase its diversity to better meet the current and future health needs of the public while providing culturally relevant care. Despite attempts in recent decades to improve to the demographic composition of the nursing workforce in the United States, the nursing workforce has remained predominantly homogeneous. It is essential to increase the diversity of the nursing profession to match the patients who are being cared for in our healthcare system (IOM, 2015; Sullivan Commission, 2007). Understanding the experience of observant Jewish nursing students (OJNS) is important due to increasing nursing workforce diversity, and to validate cultural awareness and sensitivity of transcultural nursing. The purpose of this research study was to understand the experience of OJNS. A phenomenology approach guided by Husserl's philosophical perspective was used to capture the essences of the participant's experiences. Findings from this study research may also be translatable to other racial, ethnic and religious minority groups and might inform curricula design and interventions pertinent to developing greater awareness, sensitivity, and understanding of religious and culturally diverse nursing students in order to maximize the recruitment and retention of diverse ethnic minorities in nursing education. Experiences of one ethnic minority group may apply to other minority groups within the nursing student population.

Methods: Husserl's theoretical framework provided the foundation for this study. Data was analyzed using methods of Husserl and Fu. NVIVO was used to organize, manage and augment data analysis. A convenient purposive sampling of junior and senior baccalaureate students in the Northeastern region of the United States, consisted of eight female nursing students who had all self-identified as observant Jews. The criteria of being an observant Jew was observance of the Sabbath and holidays, adherence to the dietary laws of kashrut (kosher) and observance of the principles of modesty (skirts that cover the knees and shirts or loose fitting blouses that cover the elbows and the neck). Participants were 20 to 39 years of age.

Conclusion: Findings from this study illuminated the interaction between students' motivation to become a nurse, their academic experience and faith-based and cultural values. Modest dress as an external difference that reflected inner differences and values, appreciation of inner strength and their devotion to personal/academic growth emerged. Understanding the experience of these students is important due to increasing nursing workforce diversity, validating cultural awareness and sensitivity and transcultural nursing. These findings may be used to influence educational program development for Orthodox Jewish nursing students and other religious minority groups. Findings from this study might inform curricula design and interventions pertinent to developing greater awareness, sensitivity, and understanding of religious and culturally diverse nursing students in order to maximize the recruitment and retention of diverse ethnic minorities in nursing education.