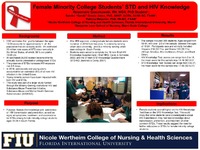 The citations below are meant to be used as guidelines. Patrons must make any necessary corrections before using. Pay special attention to personal names, capitalization, and dates. Always consult appropriate citation style resources for the exact formatting and punctuation guidelines.
Item Information
Item Link - Use this link for citations and online mentions.
http://hdl.handle.net/10755/616425
Abstract

Background: The Centers for Disease Control and Prevention (CDC) estimate that youth ages 13-24 make up just over one quarter of the sexually active population, but account for half of the 20 million new sexually transmitted diseases (STDs) that occur annually in the United States. While both men and women are affected by STDs, untreated or undiagnosed STDs cause an estimated 24,000 women a year to become infertile. The presence of a STD increases HIV exposure risk 2-5 times. In 2010 adolescents and young adults accounted for an estimated 26% of all new HIV infections in the United States in 2010. Young minority women have been impacted by both STDs and HIV. The purpose of this study is to assess the knowledge and awareness of 1) signs and symptoms, treatment, and vaccinations for STDs, and 2) HIV transmission and prevention among female college students ages 18-24 in South Florida. This study is part of a larger study through the Minority-Serving Institutions HIV and Substance Abuse Prevention initiative, Substance Abuse and Mental Health Services Administration (SAMHSA).

Conclusion/Implications: Young minority women have been impacted by STDs and HIV. Assessment of their STD/HIV knowledge and education needs will assist practitioners and educators in developing age-appropriate interventions, which will help decrease new cases of infections in this vulnerable population.