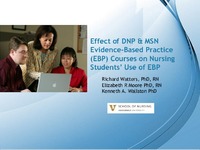 The citations below are meant to be used as guidelines. Patrons must make any necessary corrections before using. Pay special attention to personal names, capitalization, and dates. Always consult appropriate citation style resources for the exact formatting and punctuation guidelines.
Item Information
Item Link - Use this link for citations and online mentions.
http://hdl.handle.net/10755/616206
Abstract

Traditional nursing research courses at the MSN level have recently been restructured to incorporate more focus on evidence based practice (EBP). Doctorate of Nursing Practice (DNP) curricula have been revised to incorporate more content on EBP (Moore & Watters, 2013). One of the challenges is to better understand the learning needs of these students as advanced practice nurses and subsequently develop learning activities to enhance their knowledge and skills with respect to EBP (Melnyk, Fineout-Overholt, Gallagher-Ford, & Kaplan, 2012). Students' attitudes towards EBP, perceived support from their professional network, or level of understanding and prior utilization of EBP are rarely evaluated before these courses begin. The only type of appraisal that these courses typically receive is from student evaluations at the end of the course, and those evaluations seldom assess students' confidence in conducting EBP (i.e., self-efficacy). Ajzen's Theory of Planned Behavior (TPB) states that purposeful behavior is a function of a person's attitudes toward the behavior, subjective norms (what other people want the person to do) and perceived behavioral control (a construct similar to self-efficacy) (Ajzen, 1991). Knowledge about the behavior helps form the attitudes toward and perceptions related to the behavior. That theory is the conceptual framework for this study.

Purpose: To evaluate the effect of DNP and MSN level EBP courses on nursing students' attitudes, perceived support from their professional network, self-efficacy, knowledge and implementation of EBP at an independent, private research university in the southeastern United States. Research Hypotheses: H1. Implementation of EBP in the clinical setting is a function of the student's attitudes toward EBP perceived support from their professional network and their self-efficacy regarding conducting EBP. H2. DNP students will have higher baseline pre-course scores than the MSN students on all of the TPB-related subscales and the knowledge test because of their greater number of years of experience in nursing. H3. All students (DNP, MSN) will achieve higher scores on these variables post-course compared to baseline scores. H4. Pre- to post-course change scores will be similar in both the DNP and MSN students.

Methods: An EBP instrument based on the TPB was administered to 190 MSN and 37 DNP students using RED-Cap (Research Electronic Data Capture) both before and after the intervention, the EBP course. Individual student results from the pretest were linked to their posttest (for 126 students) by using their mother's maiden name and birthday/month. Once the surveys were linked, the identifiers were deleted. The instrument consists of four subscales--attitudes towards EBP (6 items), professional network support for EBP (5 items), self-efficacy for conducting EBP (9 items), and behavioral performance of EBP (8 items)?along with an EBP knowledge test (7 items) and a demographic information section. Individual items for the four subscales were developed independently by two co-authors after a review of relevant literature related to EBP research instruments. The co-authors independently assigned items to one of the TPB's four domains: attitude toward the behavior; subjective norms; perceived behavioral control; or behavioral performance. Consensus was used to resolve any differences of opinion. A methodological expert in instrument development and three EBP context experts reviewed the drafts of the instrument. The questions were further revised in 2012 based on the initial validation of the instrument by students registered in the DNP, MSN and pre-specialty nursing programs at one university.

Results: One hundred and twenty-six students completed both the pretest and posttest for a 56% response rate. Eighty-six percent of those students were female. Their ages ranged from 22 to 57 years (M=32.19; SD=8.54). The majority of the MSN students (53%) were staff nurses, and 29% worked full time. Forty-two percent of the DNP students were nurse practitioners and the majority of them (79%) worked full time. The BSN was the highest degree in nursing for approximately two thirds of the MSN students (65%), and nearly all of the DNP students (96%) had an MSN degree. Approximately one third of the students (37%) were employed in a Magnet facility. The majority of students (53%) had attended a continuing education program on EBP; whereas only 19% had an academic course on EBP within the past five years. Cronbach's alpha for each of the four subscales (pretest; posttest) was acceptable: attitudes (0.65; 0.81), network support (0.70; 0.70), self-efficacy (0.83; 0.81) and behavior (0.86; 0.85). H1. Students' attitudes toward EBP, perceived support for EBP from their professional network, and self-efficacy for conducting EBP accounted for 23% of the variance in reported behavioral implementation of EBP in the clinical setting post-EBP course. Knowledge about EBP did not contribute unique variance to explaining the post-course behavior of EBP. H2. There were no significant differences between the MSN and DNP students in baseline (pre-course) scores on any of the subscales except behavior, with the DNP students reporting they performed more EBP behaviors (2.45 on a 5-point scale where 5=4 or more times per week on average) in the clinical setting than the MSN students (M = 2.06; p = 0.008). Between group differences in reported EBP behavior were insignificant post-EBP course. H3. Overall student scores on three of the four subscales of the EBP instrument (attitudes, self-efficacy and behavior) significantly increased pre-to-post EBP course (p = <0.001). The self-efficacy subscale demonstrated the greatest pre- to post-course change scores. The mean score increased from 3.40 to 4.04 on the Likert response scale (1=strongly disagree; 5=strongly agree). Network support and knowledge scores also increased pre- to post-course, but not significantly. H4. When the DNP and MSN students were split into separate subgroups, change scores on two subscales (attitudes, self-efficacy) remained significant in both groups. There was a significant positive change in EBP behavior only for the MSN students. The MSN students' mean score increased from 2.04 to 2.52 on the 5-point Likert response scale. Knowledge scores increased significantly for the DNP students, but not for the MSN students. The DNP students' knowledge mean scores increased from 5.00 on the pre-EBP course to 5.70 on the post-EBP course out of a possible score of 7 correct answers.

Conclusion: This study examined the effect of DNP and MSN EBP courses on students' attitudes, perceived support, self-efficacy, knowledge and implementation of evidence-based practice at an independent, private research university in southeastern United States using an instrument based on the TPB. The results of the study demonstrate EBP courses can improve EBP behaviors in the clinical setting, especially in MSN students, by increasing their positive attitudes and self-efficacy regarding behavioral performance. Baseline EBP knowledge scores were similar in both MSN and DNP students, but knowledge increased significantly in DNP students when exposed to a rigorous academic course in EBP and critical appraisal of research evidence. The EBP courses seemed to have the greatest impact on both the MSN and DNP students' attitudes toward systematic reviews/meta-analyses and the importance of research study designs. The courses also influenced students' ability to write researchable questions, conduct comprehensive literature reviews and critically appraise research studies. The frequency of retrieving relevant evidence after formulating a PICO question also increased significantly after taking the EBP courses. A pretest course evaluation can help faculty determine the learning needs of MSN and DNP students in order to develop appropriate learning activities to support their acquisition of the essential knowledge and skills to use EBP in the clinical setting, while administering the same instrument after the course can help faculty evaluate the effectiveness of the teaching in accomplishing course objectives. As a result, healthcare professionals including advanced practice nurses will be better prepared to facilitate and promote the implementation of EBP to support high quality of care and improved health outcomes (Frenk et al., 2010; Ramos-Morcillo et al., 2015). Further studies should continue to examine the effectiveness of educational interventions including DNP and MSN EBP courses on students' attitudes, perceived support, self-efficacy, knowledge and implementation of EBP in different populations of nursing students (Upton, Upton, & Scurlock-Evans, 2014).