Oxytocin: Biomarker of affiliation and neurodevelopment in premature infants 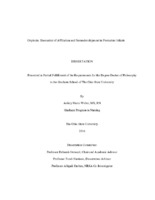 The citations below are meant to be used as guidelines. Patrons must make any necessary corrections before using. Pay special attention to personal names, capitalization, and dates. Always consult appropriate citation style resources for the exact formatting and punctuation guidelines.
Item Information
Item Link - Use this link for citations and online mentions.
http://hdl.handle.net/10755/613107
Abstract

Extremely premature infants, born at 28 weeks gestation or less, are at greatest risk for poor neurodevelopmental outcomes. While survival of these infants has improved in the past decade, neurodevelopmental outcomes have not. Because early life experiences affect brain structure and function. The quality of these early life experiences is one of the most important factors affecting optimal development. Reliable markers of neurobiological processes underlying development are necessary so that research can accurately monitor mediators of neurodevelopmental outcomes. We propose that oxytocin has the potential to be a neurobiological marker of social processes that offer neuroprotection for the infant. Oxytocin acts as a buffer for the stress response system and provides protection to the brain during inflammation, ischemia, or injury. Oxytocin has been strongly linked to neurodevelopmental outcomes in animal models, particularly those outcomes related to social cognition and emotion regulation. No studies measuring oxytocin have been conducted in premature infants, nor has the association of oxytocin levels and neurodevelopment for these infants been investigated.

The purpose of this study is to 1) describe oxytocin levels in plasma, urine, and saliva in premature infants through 34 weeks gestation and 2) determine if oxytocin levels vary with maternal-infant interaction, neurobehavioral organization, and infant stress exposure. Thirty-seven premature infants, born gestational ages 25-28 6/7 weeks, were longitudinally followed until 36 weeks gestation. Plasma and urine samples were collected at 14 days of life, then weekly until 34 weeks. Data on infant and environmental variables were abstracted from the electronic medical record. Infant social engagement behaviors was measured by the Parent-Child Early Relational Assessment, during a videotaped feeding when the infant is at one-quarter full oral feeds. Infant stress exposure was measured weekly by the Neonatal Infant Stressor Scale. Neurobehavioral organization was measured by the NICU Network Neurobehavioral Scale at 36 weeks gestation.

Plasma OT levels significantly decreased with age, at a rate of 15% per week. Urine OT levels did not significantly change with age. However, more research is needed before concluding that urine is not an acceptable noninvasive measurement in this population. Both plasma and urine exhibited wide variability across age, but values were significantly stable within infants. Plasma and urinary OT levels were not correlated, both within and between infants. Moreover, OT levels were not related to infant social engagement behaviors or infant neurobehavioral organization. We hypothesize that the stressful nature of the NICU environment may contribute to decreasing OT in premature infants. Future research must replicate these results, as well as determine how stress and the NICU environment impact OT levels in premature infants. We also hypothesize that before the emergence of coordinated movements and behaviors, premature infants primarily socially interact with their caregivers through their physiology. Future research should investigate associations among the physiologic coregulation of a dyad, coregulation of dyadic behaviors, and infant neurodevelopment. OT may serve as an important biomarker when investigating the window of development that encompasses the infant’s transition from the biologic to the social world.

The Sigma Theta Tau International grant application that funded this research, in whole or in part, was completed by the applicant and peer-reviewed prior to the award of the STTI grant. No further peer-review has taken place upon the completion of the STTI grant final report and its appearance in this repository.