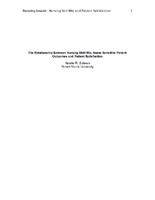 The citations below are meant to be used as guidelines. Patrons must make any necessary corrections before using. Pay special attention to personal names, capitalization, and dates. Always consult appropriate citation style resources for the exact formatting and punctuation guidelines.
Item Information
Item Link - Use this link for citations and online mentions.
http://hdl.handle.net/10755/612418
Abstract

Literature Review: Hospitals are the largest components of the United States healthcare system, and are encountering pressure to provide better quality care and reduce cost. The Patient Protection and Affordable Care Act (ACA) directed the Centers for Medicare and Medicaid Services (CMS) to initiate a system to financially incentivize healthcare quality. Nurses are the largest component of the hospital workforce and have the most patient contact hours. Due to the expansion of the Hospital Value Based Program (HVBP) in 2014 to include the nursing-sensitive value-based program (NSVBP), nurses have the highest potential to alter patient outcomes and hospital costs. The impact of nursing skill mix on patient outcomes has been examined, but current literature suggests the need to correlate skill mix with nursing-sensitive indicators and patient satisfaction over longer periods of time. Previous studies in smaller, rural hospital settings have not been reported to our knowledge.

Aim: The goal of this study is to investigate the association between nurse staffing mix, patient safety outcomes, and patient satisfaction in the context of changes in nurse staffing ratios over time at a smaller rural hospital.

Methods: UPMC Horizon converted LPN positions to RN positions on three of its general medical units, providing an opportunity for a natural two-group study design, and resulting in savings to the hospital in fewer total staff hours. We analyzed incident reporting and medical record coding on six nursing sensitive indicators, and eleven domains of the patient satisfaction obtained from hospital consumer assessment of healthcare providers and systems (HCAHP) from July 2011 to December 2015 and then from July 2011 to June 2015.

Statistical analysis. Descriptive statistics were computed and Independent Samples t Tests were used to evaluate the impact of the results at six and 12 month intervals. We hypothesized no difference in mean patient satisfaction scores and adverse patient outcome scores before and after the implementation date at 95% significance level with alpha equal to 5% and a critical value of t at 1.67.

Results: The trend data indicated significant change in a number of patient outcomes and patient satisfaction ratings at six months and at 12 months.

Conclusions: The change in nurse staffing did not significantly impact patient outcomes.  In a number of areas the change produced a moderate and significant improvement in patient satisfaction with the exception of pain management, which declined slightly but significantly. It may be possible to change nurse-staffing ratios to reduce costs while maintaining outcomes and improving patient satisfaction. Future research should focus on the relationship between factors such as bachelor’s level training and continued policy and procedure education, work environment, and patient to nurse ratios.

We analyzed outcomes data from July 2011 to June 2015 obtained from UPMC Horizon incident reporting and medical record coding on nursing sensitive indicators including hospital acquired pressure ulcers, fall rates, medication errors, and medication and patient scanning, as well as hospital consumer assessment of healthcare providers and systems (HCAHPS) patient satisfaction scores. This study did not involve human subjects and was therefore not subject for approval by an institutional review board (IRB). The University of Pittsburgh Medial Center (UPMC) Horizon Hospital System Director of Quality Improvement approved the project.

This work has been approved through a faculty review process prior to its posting in the Virginia Henderson Global Nursing e-Repository.

Except where otherwise noted, this item's license is described as http://creativecommons.org/licenses/by/4.0/