Session presented on Friday, April 8, 2016: Nationally, nursing schools have a long standing history of using traditional academic measures of grade point average (GPA) for admission and evaluation of student success. Nursing faculty are concerned that while students excel academically in pre-nursing course requirements, this academic success does not always predict student progression and retention throughout the nursing program. Published studies support the fact that selection processes of nursing programs typically focus on academic achievement (Beauvais, Stewart, DeNisco & Beauvais, 2014; Jones-Schenk & Harper, 2014). Often students who are academically qualified for nursing school entrance lack the emotional maturity associated with caring, empathy, critical thinking and commitment to professional standards (Codier & Odell, 2014). This research study was conducted to determine if utilizing non-traditional admission criteria leads to improved student outcomes. Research supports that variables such as emotional intelligence, self-efficacy, interpersonal skills, and critical thinking effect student success in baccalaureate programs (Jones-Schenk & Harper, 2014). An additional concern of solely using traditional measures for admission to nursing programs is the result of a homogenous cohort of students. This lack of diversity in baccalaureate nursing programs further impacts the issue of diversity in the national nursing workforce. Although Caucasians represent only 65.6% of the US population, 83.2% of all nurses are white (U.S. Census Bureau, 2012). In the United States, Hispanic Americans and African Americans 65 years and older are expected to show a sharp increase between years 2012 and 2050. In 2050, Hispanic elders are expected to account for 20% of the population, which is up from 7% in 2010; while African Americans are projected at 12%, up from 9% in 2010 (Vincent & Velkoff, 2010). The National Sample Survey of Registered Nurses data also demonstrates the need to increase representation of minorities in the nation's nursing workforce (Health Resources and Services Administration, 2010). These national statistics support the urgency to investigate non-traditional variables which may lead to a more diverse nursing student population. The purpose of this presentation is to disseminate the findings from a research study that targeted upper division baccalaureate nursing students over three semesters. The study compared the students' admission GPA with non-traditional variables of emotional intelligence (EI) scores and various HESI A2 sub scores. The non-traditional data was collected using the Mayer Salovey Caruso Emotional Intelligence Test (MSCEIT) and a customized Health Education Systems, Inc. (HESI) A2 exam. These non-traditional variables were also examined in relation to HESI specialty exam scores and course GPA which are currently used as outcome measures of student success. The results of this study and their implications for nursing education will be discussed during the presentation. 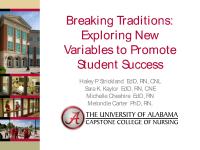 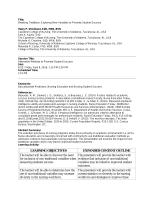