Examining the use of the transdermal scopolamine patch in the prevention of postdischarge nausea and/or vomiting: A secondary analysis

Other Title(s)
The Aftermath of Operative Prodedures: Research Pertaining to Operative Outcomes [Session] 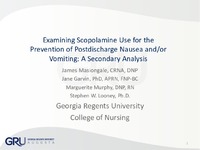 Popular Works for Masiongale, James I. by View

The citations below are meant to be used as guidelines. Patrons must make any necessary corrections before using. Pay special attention to personal names, capitalization, and dates. Always consult appropriate citation style resources for the exact formatting and punctuation guidelines.
Item Information
Item Link - Use this link for citations and online mentions.
http://hdl.handle.net/10755/603158
Abstract

Session presented on Sunday, November 8, 2015: Postdischarge nausea and/or vomiting (PDNV) is estimated to affect up to 50% of patients undergoing general anesthesia. New guidelines recommend long acting antiemetics for those considered to be at risk for PDNV. Therefore, the purpose of this study was to examine the use of the long acting antiemetic, transdermal scopolamine patch (TDS), and the subsequent incidence of nausea and vomiting among ambulatory surgical patients. From the multicenter observational cohort study of 2170 adult ambulatory surgical patients collected from 2007-2008, data were analyzed from 2098 participants with sufficient information to calculate risk scores. The parent study contained variables of interest that were recoded for this study. Descriptive statistics were used to characterize participants in terms of demographics, risk for nausea and/or vomiting, surgical procedure, TDS use (none, during anesthesia, or following the operation in the postanesthesia care unit), and incidence of nausea and/or vomiting. On average, participants were overweight (body mass index = 28.3, SD = 6.9), approximately 50 years of age (M = 49.7, SD = 15.4) and primarily female (65%). Common surgical procedures were general surgery (N = 426, 20%), gynecologic (N = 230, 11%), knee arthroscopy (N = 222, 11%), and breast (N = 219, 10%). TDS was used in less than 4% of the participants; no TDS (N = 2020, 96%), TDS during anesthesia (N = 71, 3.4%), and TDS in PACU (N = 7, <1%). For those qualified to receive a long acting antiemetic based on risk scores, less than 1% received TDS. Over 90% (N = 64) of those receiving TDS during anesthesia had a PDNV Risk Score of +/- 3; 86% (N = 6) of those receiving TDS in PACU had a PDNV Risk Score of +/- 3. Given the expected PDNV incidence of 20,30,50,60, and 80% for a risk score of 1,2,3,4,5, respectively, those not receiving TDS experienced PDNV at the expected incidence based on PDNV risk score (18,31,49,61,and 82% respectively). Those receiving TDS during anesthesia generally had an incidence of PDNV less than expected (0, 40, 37, 53,and 71% respectively). Six of the seven receiving TDS in PACU had a postoperative nausea and/or vomiting risk score +/- 3. Five of the seven receiving TDS in PACU had nausea and/or vomiting while in the PACU. Those with a PDNV risk score of 3, 4, or 5 receiving TDS in PACU had higher incidence of PDNV than expected (67, 100, and 100%); this was likely due to providers reserving TDS for those with the highest risk scores and those already experiencing nausea or vomiting in the PACU. Findings from this study highlight the limited use of TDS as a long acting antiemetic in ambulatory surgical settings and the potential value when given during anesthesia. While this cohort study has limitations, further study is needed to examine the effect of TDS on the individual components of PDNV (nausea, vomiting, nausea or vomiting, and nausea and vomiting), as well as severity of PDNV, using a randomized controlled trial to examine TDS across all levels of PDNV risk score.