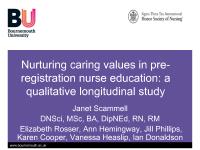 The citations below are meant to be used as guidelines. Patrons must make any necessary corrections before using. Pay special attention to personal names, capitalization, and dates. Always consult appropriate citation style resources for the exact formatting and punctuation guidelines.
Item Information
Item Link - Use this link for citations and online mentions.
http://hdl.handle.net/10755/603153
Abstract
Session presented on Saturday, November 7, 2015: Background: There is a global rise in elderly populations with complex long-term conditions; meeting their needs effectively and efficiently but with compassion, represents considerable challenges for financially-constrained health service providers. Internationally, evidence is emerging around concerns about the quality of care, particularly for older people (Katz 2011). It has been argued that in target-driven care environments, there is the potential for care professionals to lose sight of the person receiving the care to focus on task-completion, resulting in a dehumanising culture of care (Galvin and Todres 2013). Within the United Kingdom (UK) a number of high profile examples of poor quality care clearly influenced the publication of a new vision and strategy for nursing and care staff in England (NHS Commissioning Board 2012). This has focused on the organisational culture of the National Health Service (NHS) and in particular the values that underpin care delivery to ensure compassionate competent practice. Predictably attention has also focused on recruitment and education of nursing students as a way to improve the culture in healthcare, resulting in values-based recruitment and different approaches to curricular development. Limited evidence exists however, concerning the impact of such approaches over time. This paper reports on a study that evidences the impact of an education programme based on a humanising care philosophy in shaping the students' value base as they progress through their education programmes. Aim: This paper reports on phases 1-3 of a 5-phase study exploring the impact of an undergraduate-nursing curriculum based on a humanising care philosophy on the values of individual students. Methodology: The study uses a qualitative longitudinal approach to understand the beliefs and values of student nurses from the day of entry through their education programme to completion. Two cohorts of students, one year apart and commencing February 2013 were recruited, the first on an outgoing curriculum, whereas the second cohort have been exposed to a new curriculum based on a humanising philosophy (Galvin and Todres 2013). This presentation reports a comparison between the two groups at the end of their first placement and end of first year (of a three year programme) leading to nurse registration/licensure. Data were collected by individual interviews at commencement of the programme and focus groups thereafter. Ethics approval was gained for the entire project. At each stage of the process, students were formally invited to participate and on-going individual consent was gained. The audio-recordings were transcribed verbatim and analysed thematically. Findings: Data has been collected from both cohorts at the programme commencement (phase 1), end of first placement (phase 2) and the end of their first year (phase 3). At course commencement, not surprisingly there were few differences between the groups. Following the first placement, again both groups expressed similar perceptions. Students lacked confidence in their ability to put theory into practice, with some negative comments as to their position as students and learning to avoid poor practice. There were many commonalities expressed by both groups about the importance of knowledge, of how much they are learning about themselves and the negative effects of poor staffing on the quality of care. To date, students in the new curriculum more clearly articulated the difference they felt from being a healthcare assistant (HCA), the authority and trust they gained as a student (as opposed to being an HCA) and they focused more readily on the patient at the centre of care rather their own personal development. Phase 3 data collection for the second cohort has just completed at the time of writing; insights from the subsequent analysis will be incorporated in the presentation. Conclusion: By the end of their first placement, both groups were very similar in the expression of their values and to some extent presented a rather negative view of their experiences. Students from both groups were noticeably more articulate in expressing their values particularly in relation to their placement experience, as they moved through their programme. Further comparative insights emerging from the full-set of end of year one data will be a central focus of the presentation. The audience will be invited to judge transferability of findings to their setting; whilst this paper reports on a local study from one university in the UK, the insights will have resonance for other nurse education providers, regionally and globally.
Description
43rd Biennial Convention 2015 Theme: Serve Locally, Transform Regionally, Lead Globally.`
Repository Posting Date
2016-03-21T16:44:26Z
Notes
Items submitted to a conference/event were evaluated/peer-reviewed at the time of abstract submission to the event. No other peer-review was provided prior to submission to the Henderson Repository, unless otherwise noted.
Type Information
Category Information
Conference Information
Rights Holder