Attitudes toward Plagiarism in Online RN to BSN Students

Session presented on Sunday, November 8, 2015: Purpose: Plagiarism, an increasingly common occurrence in diverse academic settings, violates codes of honor, obstructs intellectual honesty, impedes students' academic success, causes a lack of confidence in student integrity, and threatens university reputations for academic integrity. In studies focusing on nursing students, researchers noted no statistical difference in the number of nursing students who plagiarised compared to other academic disciplines (McCabe, as cited in Smedley, Crawford, & Cloete, 2015). Explanations for the high rate of academic integrity violations include reasons such as saving time, improving grades, completing the academic program, or gaining professional positions. According to the Theory of Planned Behavior, attitudes toward behaviors precede actions (Mavrinac, Brumini, Bilic-Zulle, & Petrovecki, 2010). The act of plagiarism, one form of academic integrity violation, is an intentional behavior that is preceded and influenced by personal attitudes, sociodemographic conditions, and situational conditions (Krueger, 2014 ). Understanding personal attitudes influencing the choice to commit plagiarism can provide educators with greater awareness and understanding to guide the development of preemptive interventions to decrease the incidence of plagiarism, as well as the design of codes of conduct that encourage student ownership of academic integrity decisions and behaviors. This study examined online RN to BSN students' attitudes towards the act of plagiarism in an effort to reveal information that could assist in addressing the rising incidence of academic integrity violations. Methods: This descriptive correlational study, approved by two university IRB committees, examined the demographic and descriptive characteristics of a convenience sample (n= 173) of students in an online RN to BSN program and their attitudes towards plagiarism. Using the Attitudes Toward Plagiarism Questionnaire, three sub-scales of attitudes were measured. The attitudes sub-scales described the students' justification or approval (positive attitudes) of plagiarism, acceptance of other student's acts of plagiarism (negative attitudes), and the social norms (subjective norms) surrounding the act of plagiarism.In addition to a compilation of descriptive and demographic data, data were also sorted into groups for age, ethnicity, years of nursing practice, level of education, nursing position, tuition assistance, and courses completed in the program. Examination of the data then included bivariate analysis of the three sub-scales of attitudes toward plagiarism, as identified in the ATP questionnaire between groups. Results: The sample (n=173) included 87.3% females with a mean age of 36.8 + 9.9. Ethnicity noted 78% white/Caucasian and 21.4% non white, and the majority noted English as their first language. Current nursing positions included point of care nurses, charge nurses, nurse managers, and those currently not actively practicing nursing. Mean course completion was 6.6 courses, and years of nursing practice varied from none to greater than 15 years of practice, with the highest category at 3-5 years of practice. Scores for the entire sample,related to attitudes toward plagiarism, demonstrated a low approval of the act of plagiarism, with neither condemnation nor disapproval toward others who practice plagiarism, and a recognition of societal condemnation of plagiarism. Bivariate analysis demonstrated statistically significant findings between groups within the demographic and descriptive variables noting group differences in scores between ages, race/ethnicity, English as the primary language, practice positions, number of courses completed in the program, and years of nursing experience. There were no significant results found in the attitudes toward plagiarism by gender, those receiving tuition assistance, or those who have additional college education. Conclusion: This study revealed both traditional college student characteristics (gender, age, race) and nontraditional demographic characteristics (nursing practice position, years of practice) in the sample representing a diverse group of online RN to BSN students with a range of beliefs and attitudes towards plagiarism. The responses identified attitudes identifying plagiarism as an undesirable behavior and which recognized societal rejection of plagiarism, yet concurrently lacked condemnation of plagiarism behaviors in others. These findings acknowledge that while some students recognize that plagiarism is wrong, they will "turn a blind eye" towards the practice, and not condemn their peers. Additionally, the results demonstrated different perspectives of the act of plagiarism within groups. In an attempt to reverse the trend of rising plagiarism, evaluating the attitudes toward plagiarism provides constructive information to support direction and guidance for preemptive interventions and policies to address academic integrity in academic settings. Striving to improve the academic integrity practices of nursing students serves to develop and strengthen the ethical behaviors required for personal behavior and professional practice. Improving academic integrity may influence future nursing practice, and ultimately affect the decisions for safe, effective, and ethical nursing practice (Brown, as cited in Theart & Smit, 2012). References: Mavrinac, M., Brumini, G., Bilic-Zulle, & Petrovecki, M. (2010). Construction and validation of attitudes toward plagiarism questionnaire. Croatian Medical Journal 51 , 195-201. doi:10:3325/cmj.2010.51.195 Smedley, A., Crawford, T., & Cloete, L. (2015). An intervention aimed at reducing plagiarism in undergraduate nursing students. Nurse Education in Practice, 2015, doi:10.1016/j.nepr.2014.12.003 Theart, C., & Smit, I. (2012). The status of academic integrity amongst nursing students at a nursing education institution in the Western Cape. Curationis, 35 (1), 1-8. doi:10.4102/curationis.v35i1.27 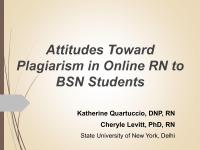