Other Title(s)
Community Health Needs for Our Veterans [Session] 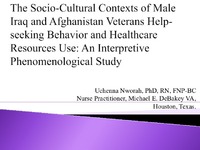 The citations below are meant to be used as guidelines. Patrons must make any necessary corrections before using. Pay special attention to personal names, capitalization, and dates. Always consult appropriate citation style resources for the exact formatting and punctuation guidelines.
Item Information
Item Link - Use this link for citations and online mentions.
http://hdl.handle.net/10755/602912
Abstract

The study explored the research question: What is the meaning of seeking healthcare for the United States male veterans who served in the Iraq and Afghanistan wars? The aim is to provide an enhanced understanding of what seeking help for healthcare needs means to the veterans and the context of their help-seeking behaviors and health resource use.

Method: Heidegger's interpretive phenomenology served as the philosophical underpinning for this study. Purposive sampling with snowball strategy was used to recruit participants from a large veteran organization and around the Houston metropolis after institutional review board approval was granted. The inclusion criteria were that participants be United States male veterans who served in either, or both the Afghanistan and Iraq wars, and who were community dwelling veterans. All participants were properly consented. Data was collected in a face-to-face interview that lasted between 30-45 minutes using a semi-structured interview guide that elicited information on three core areas: health maintenance, seeking healthcare, and reflections on healthcare decisions. All interviews were digitally audio-recorded and transcribed verbatim for analysis.

Analysis: Data collection and analysis were conducted concurrently. The final sample size (N =20 ) was determined by saturation of analytic data. Data was analyzed using Ricoeur's interpretation method adapted by Lindseth and Norberg's (2004) with hermeneutic circle technique. This is an iterative process of in-depth reading of each transcript several times to identify words, phrases, and concepts, which were coded. The codes were then categorized and further merged into five themes. The researcher used the technique of hermeneutic circle that involves moving forth and back between explanation and understanding in the analysis process, employing the researcher's pre-knowledge, and experiences of help-seeking phenomenon among men and the OEF/OIF veterans to achieve interpretation and thus a richer understanding of the phenomenon of seeking help. Qualitative rigor is established by methodic consistency, resulting in the potential for replication and for establishing the readers' trust in the research findings (Thomas and Magilvy, 2011). Rigor was maintained through congruency between the study design, research question, the philosophical underpinning, and methodology, such as the interview technique for data collection and analysis through textual interpretation. Data collection continued until data saturation. Divergent views were identified and reported for balance and credibility. Descriptive data and rich texts are provided to support themes and conclusions that depicted the participants' demographics and help-seeking experiences.

Result: Most informants (N=20) were single white males between 25-40 years of age, 90% were of enlisted military rank, and 75% served in the Army. All the participants were deployed veterans; 90% had experienced combat; and most were deployed more than once. Five themes emerged from analysis that highlighted the psychosocial and cultural basis of the meaning of participants' help-seeking behaviors and healthcare decisions- Health perception: "I just felt like I was a soldier"; "I didn't need to go to the doctor"; Conforming to traditional masculinity values: "you're not a man if you can't fix your own problems"; Military culture values: "suck it up and keep going"; Stigma of seeking help: "you just feel weak. Like I'm being a pansy or a wuss, a cry baby"; and Paradox of multiple masculinities: "I've done everything beyond my means to fix myself"; "they're the people that can fix me."

Discussion, practice implications, and future research: Help-seeking behavior is situated in contexts and was mostly constructed through the lens of traditional masculinity values of self-reliance, resilience, strength, and stoicism that interplayed with military culture and multiple masculinity values. It is a dynamic and complex behavior that is impacted by interrelated personal, social, and cultural factors. What it means to seek help is illuminated and understood within the contexts of time, participants' socio-cultural milieu, and healthcare needs. Having a better understanding of OEF/OIF veterans' perception of health, health beliefs, attitudes, values, and what influence them to seek or use healthcare resources or not, will help in formulating policies, interventions, and programs that not only focus on access issues but on psychosocial and cultural issues that may lead to increase in seeking healthcare and better use of healthcare services. Strategies and interventions that may enhance OEF/OIF veterans' healthcare experiences to facilitate help-seeking, implications for nursing practice, and suggestions for future studies are discussed.