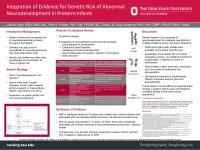 The citations below are meant to be used as guidelines. Patrons must make any necessary corrections before using. Pay special attention to personal names, capitalization, and dates. Always consult appropriate citation style resources for the exact formatting and punctuation guidelines.
Item Information
Item Link - Use this link for citations and online mentions.
http://hdl.handle.net/10755/602665
Abstract
Session presented on Saturday, November 7, 2015 and Sunday, November 8, 2015: Problem: Preterm infants are at elevated risk for a host of atypical neurodevelopmental problems, including disorders that appear later in life. A growing body of evidence supports a genetic link to risk for atypical neurodevelopment even among infants who do not have apparent genetic disease; however, no genomic risk profiles are currently used, despite the potential benefit of early intervention for those at risk. Purpose: The purpose of this integrative review was to synthesize recent evidence of genetic associations with atypical neurodevelopmental outcomes that may pose additional risk to preterm infants who do not have rare, genetic disease. Search Strategy: Electronic database searches were conducted in PubMed and CINAHL using the terms "neurodevelopment" and "genetic." Searches were limited to English-language, peer-reviewed primary research or meta-analysis reports published between July 2009 and July 2014 involving living human participants. As neurodevelopmental outcomes related to preterm birth may not appear until later in life, the search was not limited to infants, however, articles were excluded if there was no explicit genetic link with neurodevelopment or if no association was found with neurodevelopmental outcomes in novel gene targets. Results of literature search: 28 original research reports and 1 meta-analysis were included (n = 29). Synthesis of Evidence: Articles included in the analysis used a wide range of study designs, genomic approaches, outcome measures, and methodologies; an integrative review design and PRISMA reporting guidelines were used to synthesize these diverse data. Multiple large genetic deletions and polymorphisms of 43 genes were associated with neurodevelopmental outcomes. Articles were ranked based on quality parameters, as multiple studies demonstrated methodological or reporting concerns. Implications for Practice: The creation of genetic risk profiles for complex disorders of neurodevelopment would allow screening and early intervention among infants with the added neurodevelopmental risk of prematurity. This is presently hindered by inconsistent genetic association evidence, methodological considerations, reporting issues, and lack of replication. However, several avenues of investigation offer promising targets for future research, including the candidate genes Met, NRG3, and SLC6A4 and large genetic deletions, each of which were reported to have associations to neurodevelopmental outcomes in multiple, high-quality studies.
Description
43rd Biennial Convention 2015 Theme: Serve Locally, Transform Regionally, Lead Globally.`
Repository Posting Date
2016-03-21T16:34:04Z
Notes
Items submitted to a conference/event were evaluated/peer-reviewed at the time of abstract submission to the event. No other peer-review was provided prior to submission to the Henderson Repository, unless otherwise noted.
Type Information
Category Information
Conference Information
Rights Holder