Resilience and Connectedness in Graduate Psychiatric Nursing Students: Influence of a Virtual Community of Practice (VCoP) 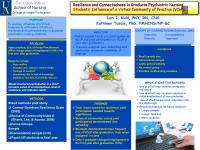 Popular Works for Kidd, Lori I. by View

The citations below are meant to be used as guidelines. Patrons must make any necessary corrections before using. Pay special attention to personal names, capitalization, and dates. Always consult appropriate citation style resources for the exact formatting and punctuation guidelines.
Item Information
Item Link - Use this link for citations and online mentions.
http://hdl.handle.net/10755/602545
Abstract
Session presented on Monday, November 9, 2015 and Tuesday, November 10, 2015: Resilience and connectedness in graduate psychiatric nursing students: Influence of a Virtual Community of Practice (VCoP). Purpose: A pilot study was conducted to determine the feasibility of including a Virtual Community of Practice (VCoP) in a graduate psychiatric nursing curriculum and to determine the effects of participation in VCoPupon students' resilience and sense of connectedness to the psychiatric nursing profession. Analysis related to feasiblity were previously published (Jevack, Tusaie, Jones, Purcell, & Huff, 2014) and this paper will focus upon resilience and connectedness. Problem: Approximately one-third of Nurse Practitioners change their employment within the first year after graduation. Reported reasons include conflicts with acceptance of their role, changes and losses in relationships, feelings of isolation, uncertainty and guilt for not knowing information they believed they should know, and inability to function in a holistic manner. During this evolving role and multiple transitions in health care delivery, would the structured participation in a VCoP for Psychiatric Nurses increase new graduates' sense of connectedness and level of resilience? Methodology: A mixed methods pilot study was conducted with a convenience sample. Graduate students (n=6) enrolled in their final year of the psychiatric nurse practitioner track at a large Midwestern university were assigned to become members of the American Psychiatric Nurses Association and to participate in the VCoP available on their website. The Connor-Davidson Resilience Scale (Connor & Davidson, 2003) was used to assess levels of resilience before and after participation and graduationin the VCoP. The Sense of Community Index 2 (Chavis, Lee, & Acosta, 2008) was used to assess changes in development of a sense of connectedness/community with colleagues. Analysis: Thematic analysis, peer debriefing and verification were used to ensure credibility of peer group analysis. Paired sample t-tests were used to determine differences in resilience and sense of community pre and post active participation in a VCoP. Findings: Total mean scores for resilienceand sense of connectedness increased posttest. Students reported using the VCoP more after graduation than when it was required as a class assignment. Only one graduate (16%) changed employment in the first year after graduation. Implications for Nursing: Although sample size is a limitation, data trends demonstrate increased levels of resilience and sense of community as well as increased use of the VCoP after graduation. While health care environments struggle to shift to new models, perhaps graduate education can utilize social networking to build connectedness and resilience within new graduates. Future plans include repeating the study with a larger sample and additional variables.
Description
43rd Biennial Convention 2015 Theme: Serve Locally, Transform Regionally, Lead Globally.`
Repository Posting Date
2016-03-21T16:31:24Z
Notes
Items submitted to a conference/event were evaluated/peer-reviewed at the time of abstract submission to the event. No other peer-review was provided prior to submission to the Henderson Repository, unless otherwise noted.
Type Information
Category Information
Conference Information
Rights Holder