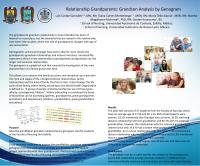 The citations below are meant to be used as guidelines. Patrons must make any necessary corrections before using. Pay special attention to personal names, capitalization, and dates. Always consult appropriate citation style resources for the exact formatting and punctuation guidelines.
Item Information
Item Link - Use this link for citations and online mentions.
http://hdl.handle.net/10755/602509
Abstract
Session presented on Monday, November 9, 2015 and Tuesday, November 10, 2015: The grandparent-granson relationship in recent decades has been of interest to researchers, but the elements that are valued in this relationship have been little studied, where the role of grandparents changes with age of one and another. Demographic and social changes have led to observe more closely the grandparents-grandson relationships and interest increases. Increased life expectancy allows a new relationship as grandparents and grandson can live longer and exclusive relationships. The genogram is a graphical tool that records the investigation of the main characteristics of a family group over time. This allows us to observe the family structure and interaction you have with the cycle and stages of life, intergenerational relationships, family relationships and the kind of family that forms later. It also displays the life cycle of the family, where family according to the World Health Organization is defined as: "A group of people united by kinship ties are of three types: affinity, consanguinity, filiation". Within inbreeding is considered the bond of blood that can be ascending (parents, grandparents, great-grandparents and others) and downstream (children, grandchildren, great-grandchildren and others). Objectives: Describe grandfather grandson relationship by genogram tool for students of the Faculty of Nursing Unit Saltillo. Methodology: Cross sectional study was to analyze the grandfather-grandson relationship, genogram tool was used, which symbols and drawings by the student project relationship with their grandparents. Pilot test was conducted with 27 students of the Faculty of Nursing Unit Saltillo in January 2015. They also observe the processing time of the genogram, correctly capture the symbolism of the genogram, the data were analyzed in SPSS v. 23 results. The pilot test consists of 27 students from the Faculty of Nursing, which have an average age of 17.59 and SD 1.24. 85% of participants were women. 18.5% mentioned that Grandpa lives at home, 33.3% said long-distance relationship with her grandfather and 40.7% with his paternal grandmother, however the relationship with the maternal grandparents nearest since only 14.8 % had a distant relationship with his maternal grandfather, 22.2% a close relationship with this, while 7.4% maintained a distant relationship with his maternal grandmother and 51.9% mentioned that it is near the relationship they have with her. The processing time of the genogram was 20 minutes and there was no difficulty to capture the symbolism. Conclusions: The genogram can be a useful tool for the analysis of the grandparent-grandchild relationship among university students, in addition to an overview of family structure and interaction you have with each member. Having considered the grandfather relation grandson of students of the faculty allows can live longer and live longer, exclusive relationships to improve life expectancy AM.
Description
43rd Biennial Convention 2015 Theme: Serve Locally, Transform Regionally, Lead Globally.`
Repository Posting Date
2016-03-21T16:30:34Z
Notes
Items submitted to a conference/event were evaluated/peer-reviewed at the time of abstract submission to the event. No other peer-review was provided prior to submission to the Henderson Repository, unless otherwise noted.
Type Information
Category Information
Conference Information
Rights Holder