Sexual Sensation Seeking and Situational Influences among Men Who Have Sex with Men from Northern Mexico: A Pilot Study 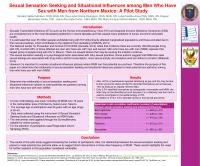 The citations below are meant to be used as guidelines. Patrons must make any necessary corrections before using. Pay special attention to personal names, capitalization, and dates. Always consult appropriate citation style resources for the exact formatting and punctuation guidelines.
Item Information
Item Link - Use this link for citations and online mentions.
http://hdl.handle.net/10755/602490
Abstract
Session presented on Monday, November 9, 2015 and Tuesday, November 10, 2015: Introduction: Sexually Transmitted Infections (STIs) such as the Human Immunodeficiency Virus (HIV) and Acquired Immune Deficiency Syndrome (AIDS) are considered one of the most devastating epidemics in recent decades and has caused many problems of social, economic and public health. It is estimated that over 34 million people worldwide living with HIV still primarily affected marginalized populations and those excluded due to their sexual practices, which contributes to the epidemic from spreading (World Health Organization [WHO], 2012). The National Center for Prevention and Control of HIV/AIDS (Censida, 2009) notes that in Mexico there are currently 220,000 people living with HIV, of which 60% of those affected are men who have sex with men and women. Men who have sex with men (MSM) represent the largest group of people living with HIV in Mexico. There are several factors that may be causing the infection continue. The sexual sensation seeking is a psychological factor associated with risky sexual practices. Some authors suggest that MSM who seek sexual feelings are associated with drug and/or alcohol consumption, more sexual activity and receptive anal sex without a condom (Matarelli, 2013). However it is important to consider situational influences (places) where MSM can find potential sex partners. Therefore the purpose of this paper is to determine the relationship of sexual sensation seeking and situational influences (places to meet potential sex partners) among men who have sex with men (MSM). Methods: A cross methodology was used, including 30 MSM over 18 years in the metropolitan area of Monterrey, Nuevo Leon, Mexico. The average age of participants was 26 years with an age range of 20-40. Data were collected using the instrument of Sexual Sensation Seeking Scale and Situational Influences on MSM Scale. The instruments were applied through the SurveyMonkey website for online surveys. For the selection of participants used Respondent Driven Sampling (RDS). Findings: Also, 42.5% of participants reported identifying as gay and this may be due to their economic status and 32.5% identified themselves as homosexual, 15% as bisexual an equally relevant data. Only 2.5% identified themselves as transgender, transvestite and MSM, the latter may not be identified as such because it is a relatively new term and is used to encompass in the epidemiology of HIV. In relation to STIs 14.3% reported having or having had gonorrhea. The study showed that sexual sensation seeking had positively related to situational influences (places to meet potential sex partners); bars/nightclubs ( r = .604, p <.01), porn movies ( r = .446, p <.05), internet cabines ( r = .410, p <.05), restroom ( r = .512, p <.01) and sex parties ( r = .430, p <.05). Conclusions: The results of this pilot study suggest increasing the number of participants. Also, the relationship between the sexual sensation seeking and places to meet potential sex partners allow us to suggest short interventions in those sites frequency of MSM. These results highlights the need for further research in this population considered vulnerable.
Description
43rd Biennial Convention 2015 Theme: Serve Locally, Transform Regionally, Lead Globally.`
Repository Posting Date
2016-03-21T16:30:07Z
Notes
Items submitted to a conference/event were evaluated/peer-reviewed at the time of abstract submission to the event. No other peer-review was provided prior to submission to the Henderson Repository, unless otherwise noted.
Type Information
Category Information
Conference Information
Rights Holder