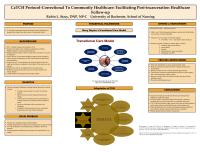 The citations below are meant to be used as guidelines. Patrons must make any necessary corrections before using. Pay special attention to personal names, capitalization, and dates. Always consult appropriate citation style resources for the exact formatting and punctuation guidelines.
Item Information
Item Link - Use this link for citations and online mentions.
http://hdl.handle.net/10755/602475
Abstract
Session presented on Monday, November 9, 2015 and Tuesday, November 10, 2015: Each year, millions of incarcerated individuals fill state, federal, and local jails in the United States. Released inmates return to their communities with little or no access to healthcare. This lack of access to healthcare places former inmates at risk for serious consequences of their chronic physical and mental health problems. Eighty percent of the released individuals describe using the Emergency Department rather than a primary care provider as their source for health care for their chronic psychiatric or medical conditions, and/or significant substance abuse. A landmark study, cited in multiple research articles, found released inmates are at a 12 times greater risk of death within the first two weeks after their release as compared to individuals of the same race, sex, and, age. Causes of death included: suicide, drug over dose, cardiovascular disease, and homicide. The current reentry program for follow-up primary care of newly released inmates from a local correctional facility is inadequate in providing continuity of post-release healthcare. A process improvement project, based on the components of Dr. Mary Naylor's Transitional Care Model (TCM), was designed to improve inmates' transition from correctional facility to community healthcare. Using the TCM provides structure to develop comprehensive discharge plans, follow-up care, improve coordination of care, and improve quality outcomes. Naylor has successfully shown the TCM enhances patient satisfaction, reduces hospital readmissions, and reduces healthcare costs. The development of a discharge protocol and referral process to establish a community-based health clinic network will potentially result in fewer inmates being lost to follow-up care and will increase positive outcomes in inmates' health. Data analysis of this process improvement will be both quantitative and qualitative. Summary of data will support that by implementing a discharge protocol and referral process for released inmates, the transition from correctional to community healthcare (CaTCH Protocol) will improve and will provide better management of inmate's chronic health conditions.
Description
43rd Biennial Convention 2015 Theme: Serve Locally, Transform Regionally, Lead Globally.`
Repository Posting Date
2016-03-21T16:29:46Z
Notes
Items submitted to a conference/event were evaluated/peer-reviewed at the time of abstract submission to the event. No other peer-review was provided prior to submission to the Henderson Repository, unless otherwise noted.
Type Information
Category Information
Conference Information
Rights Holder