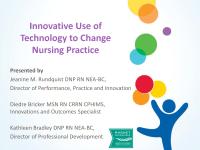 The citations below are meant to be used as guidelines. Patrons must make any necessary corrections before using. Pay special attention to personal names, capitalization, and dates. Always consult appropriate citation style resources for the exact formatting and punctuation guidelines.
Item Information
Item Link - Use this link for citations and online mentions.
http://hdl.handle.net/10755/602440
Abstract
Session presented on Tuesday, November 10, 2015: When implementing changes in nursing practice, it is important to audit for compliance with the change. Within quality and process improvement methodology, observational audits are considered the 'gold standard' because observing the practice in its natural setting is more reliable than documentation or self-report. As one large, academic pediatric organization was implementing standard care bundles to reduce preventable harm to patients, the inter-professional leaders of this work knew it was imperative to conduct observational audits. Historically, conducting observational audits was both time and cost-prohibitive. The auditors needed at least basic clinical acumen in the focus of the audits, as well as training to ensure inter-rater reliability. Audits were on paper and thus needed entry into a spreadsheet or software package for analysis. Information necessary from the electronic medical record was pulled manually through chart audits, or by running electronic reports that then needed validation. With the large number of audits needed for the preventable harm initiative, the team brainstormed alternatives to this traditional method of auditing. In creating a plan to make bundle compliance audits more efficient and effective, various software applications were evaluated. The inter-professional team decided to use software that was designed for research but transferrable to quality and safety. Data were collected and managed using REDCap electronic data capture tools hosted at our organization. REDCap (Research Electronic Data Capture) is a secure, web-based application designed to support data capture for research studies, providing 1) an intuitive interface for validated data entry; 2) audit trails for tracking data manipulation and export procedures; 3) automated export procedures for seamless data downloads to common statistical packages; and 4) procedures for importing data from external sources (Harris et al, 2009). REDCap provided this organization the opportunity to create audit surveys accessible through iPads and iPhones as well as at computer stations throughout the organization. This greatly improved efficiency as the data was directly entered into the database at the time of the audit rather than on paper to be entered at a later date. REDCap was also able to automatically populate fields from the electronic medical record into the audit thereby reducing time and increasing reliability of the data. Finally, the REDCap database could interface with the quality dashboard providing real-time data reporting. Overall, adoption of this technology improved effectiveness - time spent on just-in-time education and coaching rather than completing paper audits. REDCap audit surveys were built for all the preventable harm teams. After implementing REDCap for auditing in the three pilot teams (peripheral intravenous catheter infiltrates/extravasations (PIVIE), central line associated blood stream infections (CLABSI), and hospital-acquire pressure ulcers (HAPU)) the auditors reported ease of use, shorter time needed to conduct an audit, and more time to do just-in-time teaching and coaching on the bundle elements. Each audit team could also access the reports to see the bundle compliance data for their unit and as a whole hospital in real time. The unit auditor could then focus education on any element lagging and/or design other interventions to improve the overall compliance. Each bundle has three to six elements so compliance for each element was reported as well as the all-or-none compliance. All-or-none compliance means that every element in the bundle was completed. This presentation will demonstrate how the use of the electronic auditing tool resulted in improvement in efficiency and effectiveness of the observational auditing process resulting insignificant improvement in PIVIE, CLABSI, and HAPU bundle compliance.
Description
43rd Biennial Convention 2015 Theme: Serve Locally, Transform Regionally, Lead Globally.`
Repository Posting Date
2016-03-21T16:28:59Z
Notes
Items submitted to a conference/event were evaluated/peer-reviewed at the time of abstract submission to the event. No other peer-review was provided prior to submission to the Henderson Repository, unless otherwise noted.
Type Information
Category Information
Conference Information
Rights Holder