Other Title(s)
Curbing the Use of Ineffective and Costly Healthcare: Nursing Evidence for Choosing Wisely [Symposium] 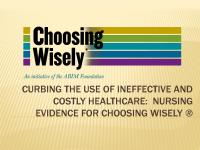 The citations below are meant to be used as guidelines. Patrons must make any necessary corrections before using. Pay special attention to personal names, capitalization, and dates. Always consult appropriate citation style resources for the exact formatting and punctuation guidelines.
Item Information
Item Link - Use this link for citations and online mentions.
http://hdl.handle.net/10755/602436
Abstract
Session presented on Monday, November 9, 2015: The Choosing Wisely campaign is an initiative of the American Board of Internal Medicine (ABIM) that is focused on improving communication between providers and patients. The campaign began in April 2012 with the goal of promoting communication that would help patients choose care that is supported by evidence, does not duplicate tests or procedures that have already been completed, does not cause harm and is truly needed to guide care (choosingwisely.org, n.d.). The ABIM Foundation challenged medical organizations to develop a list focused on their specialty. Currently, there are 58 health care provider organizations that have released a list of tests or procedures to consider and an addition ten organizations that plan to release a list in 2014 (ABIM Foundation, n.d.). There are 14 consumer groups that have collaborated with Consumer Reports that are supporting the Choosing Wisely campaign, including AARP and the Leapfrog Group (ABIM Foundation, n.d.). In a 2014 study funded by the Robert Wood Johnson Foundation and conducted by PerryUndem Research/Communication (2014), only one in five physicians were aware of the Choosing Wisely campaign. In the same survey, three of four physicians indicated that a provider ordering unnecessary medical tests and procedures is a serious problem and more than half believe they are in the best position to address the problem (PerryUndem Research/Communication, 2014). The American Academy of Nursing (AAN) was invited to participate in the Choosing Wisely campaign to develop recommendations specific to the role of nursing. AAN is leading the nursing profession's recommendations and plays a critical role in the education of nurses nationwide regarding the recommendations (choosingwisely.org, n.d.). Texas has been selected to be the pilot state for implementing nursing considerations for the Choosing Wisely campaign. The first five nursing recommendations were released in October 2014 and include considerations regarding fetal monitoring, mobility for older adult patients, restraints, waking for routine care, and urinary catheters (AAN, 2014). AAN is working with multiple specialty organizations to develop additional nursing related recommendations. Until AAN became involved with the Choosing Wisely campaign, nursing did not actively participate with any of the recommendations. ABIM included AAN with the intent to broaden the campaign beyond just physicians and to include a wider array of healthcare providers, including advance practice nurses and registered nurses. Currently there are over 192,000 nurse practitioners (aanp.org, 2014) and approximately 2.7 million registered nurses (hrsa.gov, 2013) compared with approximately 894,000 active physicians in the United States (kff.org, 2014). Given that there are significantly more nurses than physicians, it is clear that nursing needs to be involved in discussions and decisions that impact health care consumers. In October 2014, Texas was selected as the lead pilot state to implement the nursing components of the Choosing Wisely campaign. The campaign will be implemented in two phases. Phase one of the pilot project is focused on the development of toolkits to educate advance practice nurses and registered nurses about the Choosing Wisely campaign and to develop tools that evaluate the effectiveness of the education provided. Phase two of the pilot project will be launched in collaboration with the national Campaign for Action: Future of Nursing led by AARP and the Robert Wood Johnson Foundation (RWJF). The Choosing Wisely Campaign aligns with the goals of the Campaign for Action in that both campaigns are focused on changing healthcare in the 21st century (RWJF.org, n.d.). State action coalitions engaged in the Campaign for Action will be selected to participate in phase two. During phase two, the Choosing Wisely campaign will be launched in the selected states. The leaders of the pilot project have partnered with the Texas Commission on Nursing Workforce Studies (TCNWS). The TCNWS conducts studies in various health care settings each year, focusing on nurse staffing. This collaboration partners multiple organizations to determine the effectiveness of education provided as part of the Choosing Wisely campaign. A modified version of the PerryUndem survey was developed and administered online during phase two of the pilot project. The goal of the survey is to measure baseline and progress of awareness and adoption of Choosing Wisely recommendations by nurses. As nurse leaders, it is our responsibility to understand and support adoption of evidence based recommendations. Most of the initial recommendations for nursing can be implemented by educating nurses at the bedside. Support from nursing leadership will encourage rapid adoption, resulting in improved outcomes for patients. Tools are available to assist leaders with education, including guidelines with explanation of the recommendation and supporting evidence. Collaboration with other health care professionals will enhance adoption.
Description
43rd Biennial Convention 2015 Theme: Serve Locally, Transform Regionally, Lead Globally.`
Repository Posting Date
2016-03-21T16:28:53Z
Notes
Items submitted to a conference/event were evaluated/peer-reviewed at the time of abstract submission to the event. No other peer-review was provided prior to submission to the Henderson Repository, unless otherwise noted.
Type Information
Category Information
Conference Information
Rights Holder