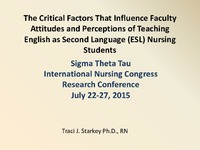 The citations below are meant to be used as guidelines. Patrons must make any necessary corrections before using. Pay special attention to personal names, capitalization, and dates. Always consult appropriate citation style resources for the exact formatting and punctuation guidelines.
Item Information
Item Link - Use this link for citations and online mentions.
http://hdl.handle.net/10755/601960
Abstract

Purpose: The nation's demographic changes have led to a shortage of racial and ethnic minorities in nursing. Recruitment efforts have resulted in a growing number of diverse English as second language (ESL) nursing students. Unfortunately, these students have had higher rates of attrition and lower levels of academic achievement. If these students continue to experience high attrition rates, cultural diversity in the practice setting could be greatly impacted along with the ability to provide culturally relevant health care. As student diversity increases, communication issues based on cultural and language differences have created major challenges for nurse educators. The purpose of this qualitative study was to explore the critical factors that influence faculty attitudes and perceptions of teaching ESL nursing students.

Methods: The grounded theory method based on the philosophical underpinnings of symbolic interactionism and pragmatism was used to gain a more in-depth understanding of the social processes taking place within nursing education. Strauss and Corbin were used as the guideline in conducting this grounded theory research study. Semi-structured interviews and a focus group were performed to collect data from nurse faculty from various schools of nursing in the Souteast Florida area. Data segments from the interviews were continuously coded, categorized, and analyzed for conceptual relationships. Theoretical sampling and the focus group interview were used to validate the concepts, themes, and categories identified during the individual interviews. Conceptual relationships were developed into a substantive level theory that explained a domain of behavior and the interactive processes occurring between faculty and ESL students.

Results: The core category that developed from the data grounded in the voices of nurse faculty was conscientization. The process of conscientization involves attaining a higher level of intentional consciousness and may include gradual as well as revolutionary changes at multiple levels. The three dominant categories that emerged from the data and supported the core category were overcoming, coming to know, and facilitating. Overcoming referred to the ability to work through or surmount an issue, problem, obstacle, or situation. Coming to know is described as a dynamic process that entails a unique personal experience that is constructed of objective knowledge integrated with subjective perceptions of experience. Facilitating involves the act of deliberately supporting others by using multifaceted strategies with the intent of progressing toward change. The theoretical framework of conscientization provided an in-depth understanding and explanation of the social processes involved in teaching ESL nursing students. Conscientization was the process faculty engaged in when overcoming barriers, coming to know, and facilitating the success of ESL students. The categories contribute to conscientization as engaging in a critical consciousness enhances the categories.

Conclusion: The three dominant categories: overcoming, coming to know, and facilitating revealed the process of conscientization. Conscientization influenced faculty attitudes and perceptions of teaching ESL nursing students. Conscientization was depicted as an increase in the critical consciousness of nurse faculty as they gain a greater awareness of the changing reality of the learning environment. As student diversity increases, the process of conscientization grows as faculty interact with ESL students and attempt to facilitate their success. The findings from this study could be used as a premise for curriculum reform and the development of alternative pedagogies that specifically targets ESL students. With an increase in consciousness among nurse faculty, the success of ESL students and diversity in the practice setting could be enhanced.