Other Title(s)
Promoting Health through Cessation and Vaccination 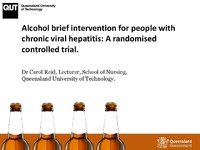 The citations below are meant to be used as guidelines. Patrons must make any necessary corrections before using. Pay special attention to personal names, capitalization, and dates. Always consult appropriate citation style resources for the exact formatting and punctuation guidelines.
Item Information
Item Link - Use this link for citations and online mentions.
http://hdl.handle.net/10755/601881
Abstract

Purpose: Viral hepatitis is among the top 10 infectious disease killers and the leading cause of liver cancer and cirrhosis with more than 500 million people living with this disease. A synergy has been found to exist between heavy alcohol consumption and chronic hepatitis virus infection in the aetiology of hepatocellular carcinoma. Heavy alcohol consumption and chronic viral hepatitis are both risk factors significantly associated with liver cirrhosis, accelerated development of fibrosis and subsequent increased mortality risk. It is therefore suggested that these patients should abstain from consuming alcohol. Little quality research has examined the effectiveness of alcohol reduction programs in this cohort. This study informs clinicians, health services and policy makers of the most effective approaches to alcohol reduction for those with chronic viral hepatitis (B and C) to reduce the risks of poorer patient health outcomes, mortality and the health burden. The purpose of this study was to identify if an assessment and brief intervention (BI) using motivational interviewing (MI) and the 5As model, compared to routine care (no formalised intervention) for alcohol reduction was an effective intervention.

Methods: A randomized controlled trial was undertaken. Participants were blinded to the randomisation process, and the intervention provided. They were also stratified according to viral type (B and C). Following consent, participants in the intervention group received an alcohol use assessment using the instruments, Alcohol Use Disorders Identification Test_Consumption (AUDIT C) and the Timeline Followback_Alcohol (TLFB_A). They were then randomised into the control or intervention groups. The intervention group received a BI using the 5As model and motivational interviewing from the Nurse Practitioner (Hepatology). The 10 minute intervention was a part of the routine appointment. The 5As model (Assess, Advise, Agree, Assist, Arrange) is a model of behaviour change for application in the primary care setting that can be used for alcohol counselling management and was used in this study. The control group received routine care only. The primary outcome of a 50% reduction of alcohol consumption measured by the Alcohol Timeline Follow back survey over a 30 day period was examined using chi-squared. TLFB_A was also examined to see if there was a mean difference between groups and was logarithmically transformed to reduce the effect of outliers. Geometric means and 95% confidence intervals were reported. Audit C and TLFB_A were analysed using linear mixed models with an unstructured covariance structure to account for repeated measures.

Conclusion: Assessing for alcohol use using the AUDIT C, and providing a brief intervention using motivational interviewing and the 5As model by the Nurse Practitioner Hepatology compared to routine care was a useful intervention to reduce alcohol consumption in people with chronic viral hepatitis. Additionally this study adds to the evidence that brief interventions for people with alcohol use disorders in the primary healthcare setting are clinically effective. This adds to the literature on interventions for the management of people with chronic viral hepatitis and alcohol consumption. This study showed that alcohol consumption in patients from this this high risk, chronic disease population 'who may or may not have an alcohol disorder but may be drinking in ways that are harmful, can benefit from an assessment and brief intervention similar to that provided in general populations.