The Association between Exposure to Intimate Partner Violence and having an Abnormal Pap Test and HPV Infections among Women in a Low-Income, Urban Area

Other Title(s)
Promoting Health among Victims of Intimate Partner Violence 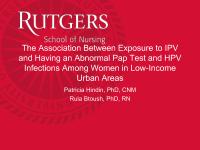