Other Title(s)
Promoting the Maternal Experience, Breastfeeding Within the Hospital 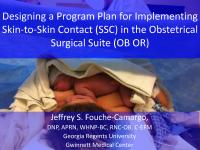 The citations below are meant to be used as guidelines. Patrons must make any necessary corrections before using. Pay special attention to personal names, capitalization, and dates. Always consult appropriate citation style resources for the exact formatting and punctuation guidelines.
Item Information
Item Link - Use this link for citations and online mentions.
http://hdl.handle.net/10755/601787
Abstract
Session presented on Sunday, July 26, 2015: Breastfeeding is associated with numerous health benefits to newboRN There are multiple evidence-based interventions that improve rates of exclusive breastfeeding. One such intervention is providing skin-to-skin contact between the newboRNnd mother immediately following birth. One Maternaly hospital in northeast Georgia implemented this intervention following vaginal births and has decided to expand the intervention to cesarean births performed in their obstetrical surgical suite. In order to safeguard a successful implementation, a formal program plan was developed to include an education plan, small tests of change, and a rollout plan. An evaluation of the facility's recent implementation of skin-to-skin contact following vaginal birth was included as a component of the program plan to identify any required operational changes, as well as any impact on staffing, patient satisfaction, and exclusive breastfeeding rates. No significant impact on staffing was realized as a result of implementing SSC following vaginal birth, t(2) = 0.462, p < 0.05. Patient satisfaction was not significantly different after implementation of SSC, t(9) = -0.640, p = 0.75. Differences in exclusive breastfeeding for three months prior to implementing SSC and for ten months after implementation were significant, ?2(1, N=1232) = 10.53, p = 0.001. Program Plan Development: Development of the program plan included identification and analysis of solutions to address potential issues with implementing SSC following cesarean births. This pre-implementation plan consisted of 1) force field analysis to identify driving and restraining forces, 2) SWOT analysis, 3) process algorithm and evaluation of data from implanting SSC following vaginal birth. Based on findings from pre-implementation planning, the program plan for implementing Skin-to-Skin Contact (SSC) in the Obstetrical Surgical Suite was developed to include 1) a multidisciplinary education plan, 2) process and outcome quality improvement measures to be monitored, 3) small test of change and the 4) intervention roll out plan. Implications for Practice: The increase in exclusive breastfeeding is an important outcome measure for facilities because it is now a reportable measure for facilities accredited by the Joint Commission. Increasing exclusive breastfeeding is also a key national objective included in the Healthy People 2020 initiative. The facility expects to see similar increases in the rate of exclusive breastfeeding once SSC is implemented following cesarean births.
Description
Research Congress 2015 Theme: Question Locally, Engage Regionally, Apply Globally. Held at the Puerto Rico Convention Center.
Repository Posting Date
2016-03-17T12:55:31Z
Notes
Items submitted to a conference/event were evaluated/peer-reviewed at the time of abstract submission to the event. No other peer-review was provided prior to submission to the Henderson Repository.
Type Information
Category Information
Conference Information
Rights Holder