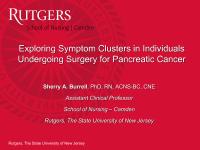 Popular Works for Burrell, Sherry A. by View

The citations below are meant to be used as guidelines. Patrons must make any necessary corrections before using. Pay special attention to personal names, capitalization, and dates. Always consult appropriate citation style resources for the exact formatting and punctuation guidelines.
Item Information
Item Link - Use this link for citations and online mentions.
http://hdl.handle.net/10755/601746
Abstract
Session presented on Monday, July 27, 2015: Purpose: The aims of this primary nested, longitudinal, exploratory study were to explore self-reported symptom profiles to identify the presence of and changes in symptom clusters (SCs) and factors that influence the severity of the SCs in individuals with stage II pancreatic cancer (PC) before and at three, six, and nine months after surgery alone or in combination with adjuvant chemotherapy or chemoradiation therapy. Methods: This primary nested, longitudinal, exploratory study was conducted within an ongoing single center, prospective, randomized, double-blind, placebo-controlled clinical trial of ethanol celiac plexis neurolysis versus placebo for pain control (the parent study). One hundred and forty-three patients undergoing surgical resection for stage II PC were identified through the parent study located at a comprehensive cancer center in the northeastern United States. The Theory of Unpleasant Symptoms served as the theoretical framework to guide this study. Study variables included: 17 PC symptoms; 14 physiological factors; 4 psychological factors; and 6 situational factors. Symptom data were measured by the Functional Assessment in Cancer Therapy: Hepatobiliary Cancer Tool. Demographic and clinical data were obtained from a review of parent study folders that included supportive documentation from patients' electronic health records. Major statistical methods used included exploratory and confirmatory factor analyses and generalized linear modeling. Results: The prevalence and severity of symptoms varied over time; however, five symptoms (fatigue, trouble sleeping, poor appetite, weight loss, and trouble digesting food) were consistently among the most prevalent and severe symptoms. Sixteen SCs were identified that were not identical over time; although, four core 'SC' sub-groupings were found, which included: a) depression and anxiety; b) trouble digesting food and loss of bowel control; c) change in taste, dry mouth, fatigue, and weight loss; and d) nausea, back pain, and abdominal pain/cramping. Pre-operative factors that influenced the severity of a SCs were also identified. Pain status was associated with the pain-gastrointestinal SC (slope=0.71; 95% CI 0.31, 1.11; p=0.0364) and cancer worry was associated with the mood 'SC' (slope=0.34, 95% CI 0.20, 0.48; p=0.0006). Conclusion: This was the first study to examine symptoms to identify and follow SCs over time in post-operative patients with stage II PC. Findings provided evidence of the existence of 16 distinict SCs, 4 symptom cluster core sub-groupings, and 2 pre-operative factors that influenced the severity of SCs in PC patients within the first 9 months of surgery. The findings from this study may be used to provide anticipatory guidance and inform prevention, assessment, and management of SCs in PC surgical populations.
Description
Research Congress 2015 Theme: Question Locally, Engage Regionally, Apply Globally. Held at the Puerto Rico Convention Center.
Repository Posting Date
2016-03-17T12:54:27Z
Notes
Items submitted to a conference/event were evaluated/peer-reviewed at the time of abstract submission to the event. No other peer-review was provided prior to submission to the Henderson Repository.
Type Information
Category Information
Conference Information
Rights Holder