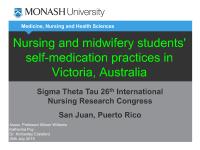 The citations below are meant to be used as guidelines. Patrons must make any necessary corrections before using. Pay special attention to personal names, capitalization, and dates. Always consult appropriate citation style resources for the exact formatting and punctuation guidelines.
Item Information
Item Link - Use this link for citations and online mentions.
http://hdl.handle.net/10755/601727
Abstract
Session presented on Sunday, July 26, 2015: Purpose: Self-medication is a global phenomenon and a major form of self-care with increasing numbers of people taking greater responsibility for their own health (Jain et al. 2011). Self-medication involves the use of medicinal products to treat self-recognised disorders or symptoms, or the intermittent or continued use of a medication prescribed by a physician for chronic or recurring diseases or symptoms (WHO 2000). In most instances, self-medication is the first step in self-care, since professional care for minor ailments is often unnecessary and contributes to healthcare burden (World Self-Medication Industry 2007). However, problems with self-medication include antimicrobial resistance, adverse reactions and prolonged suffering (Bennadi 2014). The purpose of this paper is to explore the self-medication practices of nursing and midwifery students in Victoria, Australia. Methods: A cross-sectional study design using a self-administered web survey targeted 713 nursing and midwifery students undertaking a Bachelor of Nursing, Bachelor of Midwifery or a combination of Bachelor of Nursing/Bachelor of Midwifery and Bachelor of Nursing/Bachelor of Emergency Health degree at one campus of Australia's largest university. The survey was adapted from the work of Klemenc-Ketis et al. (2010) to the Australian context. The survey collected brief demographic information before examining the prevalence of self-medication, reasons for self-medication, the types of medications used and the student's views of the safety of self-medication. The survey was piloted prior to the study commencing, and no changes were made as a result of this pilot. Ethics approval was obtained prior to data collection which occurred between February and May 2014. Data was analysed descriptively. Results: Of a possible 713 students, 120 students completed the survey (response rate 16.8%). The mean age of respondents was 23.9 (+ 7.7) years old and the majority (n=112, 93.3%) were female. Results showed that 91.6% (n=110) of student nurses and midwives self-medicated in the past year, most for pain management using paracetamol or ibuprofen. The average number of medications consumed was 5.54 (+ 2.4) medications per student. Nearly half the students (n=46, 42.2%) reported the consumption of antibiotics that had been prescribed for a previous health problem and nineteen (17.3%) reported taking benzodiazepines. The incidence of back pain amongst the students was high (n=84, 76.4%), along with stress (n=82, 74.5%), fatigue (n=70, 63.6%) and depression (n=41, 37.3%). Students reported the main reason for self-medication was to play an active role in their health and 68.3% (n=82) of students had given advice about medications to other people. The survey has a Cronbach's alpha reliability of 0.817. Conclusion: Self-medication in student nurses is common, and is the first step in self-care, since professional care for minor ailments is often unnecessary and can contribute to the healthcare burden (World Self Medication Industry 2007, WHO 2000). Reasons for self-medicating are similar to the research of Shaghaghi et al. (2014). However, it was concerning that the majority of students reported back pain, almost half reported taking previously prescribed antibiotics and almost one fifth reported taking benzodiazepines. These key findings require further investigation and are a concern for the health and wellbeing of our future nursing workforce. A fundamental understanding of self-medication practices by student nurses and midwives who are better informed than the general public and upon graduation will have a key role in educating patients about medication-taking is necessary for the safe and quality use of medications.
Description
Research Congress 2015 Theme: Question Locally, Engage Regionally, Apply Globally. Held at the Puerto Rico Convention Center.
Repository Posting Date
2016-03-17T12:53:55Z
Notes
Items submitted to a conference/event were evaluated/peer-reviewed at the time of abstract submission to the event. No other peer-review was provided prior to submission to the Henderson Repository.
Type Information
Category Information
Conference Information
Rights Holder