Purpose: This Quality Improvement Project (QIP) was designed to integrate diabetes self-management education (DSME) and diabetes self-management support (DSMS) to empower patients and families in disaster readiness preparation. The American Diabetes Association (ADA) recognizes the need for development of a diabetes specific disaster preparation kit in the published preparedness guidelines. A review of the research surrounding Hurricane Katrina indicates significant loss of diabetic control as measured by A1C, a loss of significant life expectancy and increased cost of care for patients with diabetes post disaster.  The need for change is further supported by the research stating half to two thirds of patients presenting to disaster shelters do not have needed medications, proving diabetic patients are not only particularly vulnerable during disasters due to the need for daily medications and diet control, but also face a lack of education for diabetes-specific disaster planning.  Failure to meet the standard of education by primary providers and lack of support concerning disaster preparation for diabetics has led to significant deficits in diabetic control during and after disasters. This project explored the special needs in primary and tertiary level emergency prevention for rural patients with diabetes, and aims to demonstrate decreased vulnerabilities of community participants who prepare for disasters.

Design: In this QIP a convenience sample of 25 patients with diabetes, age18 and older, presenting to a rural clinic, was recruited between January 1 and March 30, 2015. The Diabetes Disaster Plan outlines a primary practice change project designed to reduce vulnerability of patients with diabetes in disaster situations by using Federal Emergency Management Agency (FEMA) publications and standards to educate patients on how to prepare for an emergency. The plan included disaster training in at-risk populations with diabetes in the rural clinic, a patient-centered class on diabetes specific disaster kit preparation and inclusion of the primary care site in preparation activities.

Methods: This project was approved as a Quality Improvement Project (QIP) by the Institutional Review Board at the University of South Alabama and given an exempt status. Data collected by the project organizer and clinic staff pre and post class was compared using SPSS software.

Findings: This project identifies a gap in primary provider education concerning disaster preparation for patients with diabetes. The QIP patient responses of 0% having previously received education regarding disaster preparation are consistent with the generally reported lack of primary provider provision of education regarding diabetes and disaster preparation. Every individual needs an emergency preparedness plan tailored to their specific needs. A tailored plan is especially important for the patient with diabetes. The plan must include diabetic-specific instructions to minimize the short and long term impacts of the disaster experience. Following the project, a frequency table demonstrated 60% of participants responded in post class interviews that they had prepared a disaster kit for diabetes, including diabetic medications, indicating the project was successful.

Conclusions: Both primary care providers and patients need to be aware and take an active role in preparing for disasters. Failure to meet the standard of education and support concerning disaster preparation for diabetics has led to significant deficits in diabetic control during and after natural disasters. Providers can positively impact patients’ lives by educating patients on the need to have a disaster plan in place to reduce the immediate and long term impacts of future weather events in the rural area.

Clinical Relevance: The QIP suggests investment by providers in individual disaster preparation education for patients will positively result in preparation by vulnerable patients and decrease vulnerability in times of disaster. 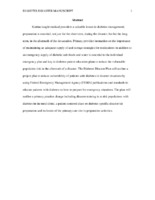 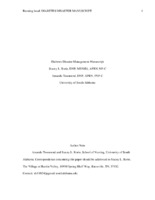