Intraosseous and Venous Blood Lactate Levels Correlate; PT/INR Do Not

Research Abstract Purpose: Intraosseous (IO) vascular access is useful for fluid and medication delivery and blood sampling when intravenous access is difficult or impossible. Serum lactate is a potentially useful biomarker when managing patients with severe sepsis or trauma. IO blood values correlate with peripheral intravenous (IV) blood values for a number of laboratory tests, with little clinical data for the suitability of IO blood for determining lactate and PT/INR levels. The objective was to add to available data comparing IO marrow/blood (initial 1 mL aspirate), IO blood (subsequent aspirate), and IV and capillary blood to determine if there is a correlation between specimens for serum lactate and PT/INR levels. Design: Study data presented was collected from two-single center prospective studies. Setting: The studies were conducted at a teaching institution associated with a local university. Participants/Subjects: Healthy, non-pregnant female and male volunteers 21 years or older with no known contraindications to IO insertion were recruited by word of mouth from local EMS agencies and community. Exclusions were related to additional procedures done with this protocol (known infection, imprisoned, cognitively impaired, taking anticoagulants, allergies or sensitivity to lidocaine, shellfish or iodine). The study was conducted in accordance with Good Clinical Practice as defined by the International Conference on Harmonization (ICH) guidelines, and applicable regulations including, where applicable, the Declaration of Helsinki. Methods: The studies were IRB approved and volunteers were consented. For 30 subjects, IO and IV specimens were collected; 10 had capillary blood and IO marrow/blood collection as well. The IO specimens were drawn from proximal humerus and tibial catheters (EZ-IO®, Vidacare Corp, Shavano Park, TX). Analyses for lactate and PT/INR were done with an i-STAT® point-of-care analyzer and lactates were also obtained with the Lactate Plus analyzer. Means and Pearson's correlation were computed to assess the relationship between venous, capillary and IO blood and blood/marrow results. Results/Outcomes: Specimens analyzed using the i-STAT® had a significant correlation between IV blood and IO marrow/blood (r=0.76, n=20, p<.001), and between IV blood and IO blood (r=0.72, n=46, p<.001). Capillary and IV blood analyzed using the Lactate Plus lacked correlation. When IO blood specimens were analyzed using the i-STAT® and matching specimens were analyzed using the Lactate Plus, means appeared similar, but lacked significant correlation. The absence of correlation may be due to the smaller sample size (n=10).There was no correlation between IO and IV blood for PT/INR levels. Implications: Lactate levels obtained from IO specimens appear comparable to lactate levels from IV blood, reflected in a positive correlation. The PT/INR levels did not correlate. Specimen collection from healthy subjects was a study limitation. Further investigation is needed to determine if the relationship between IO and IV lactate values exists in patients when lactic acidosis is a factor, such as in ill or injured patients. If the relationship exists in actual patients IO blood lactate results may serve as a quick reference to alert the clinician to prepare for treatment for impending or current shock. 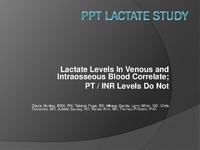