Women ages 18 to 26 have the highest prevalence of human papillomavirus (HPV) disease in the United States as well as worldwide, and in particular, women ages 20 to 24 years (Taylor, Hariri, Sternberg, Dunne & Markowitz, 2011). Ratanasiripong (2012) found that HPV vaccine rates have increased since the introduction of the Gardasil vaccine by Merck in 2006 from between 5 percent in one sample in 2007 to as high as 49 percent of college-aged women receiving at least one dose. The research question for this project was the following

Do women aged 18 to 26 years perceive themselves at risk for HPV disease and do they have the intentions to receive the HPV vaccine series as determined by Thai Human Papillomavirus Vaccine Belief Scale (Thai-HPVBS)? The Thai-HPVBS bases its questions upon the constructs in the Health Belief Model (Rosenstock, 1966) which examines variables which influence health behavior. In their roles as primary care providers nurse practitioners are able to provide the cue to action for women aged 18 to 26 years to consider receiving the HPV vaccine series. Understanding the intentions of women, aged 18 to 26 years guided the nurse practitioner in this project to design a text message educational intervention for the sample population. There were no significant findings. 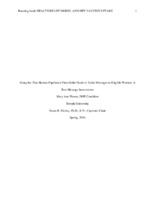