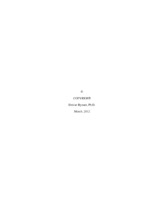 The citations below are meant to be used as guidelines. Patrons must make any necessary corrections before using. Pay special attention to personal names, capitalization, and dates. Always consult appropriate citation style resources for the exact formatting and punctuation guidelines.
Item Information
Item Link - Use this link for citations and online mentions.
http://hdl.handle.net/10755/269512
Abstract

Overeating is a common eating disorder and often leads to obesity and to significant physical, emotional and social problems often warranting nursing care. The psychological and behavioral factors surrounding overeating are noted frequently in the literature, but are not emphasized in most prevention and treatment programs for overeating. Codependency has expanded beyond the chemical dependency field and describes the dysfunctional pattern of behavior of an individual in a relationship with another person or from survival in a dysfunctional family of origin. This pattern of behavior includes the neglect of personal needs, focus and dependency on others, boundary/control issues, low self-worth along with physical and psychological consequences. Anxiety, depression, anger and compulsivity are psychological problems often linked with overeating and codependency. Because of the complexity, nursing care of persons with overeating and codependency problems is best viewed from a systems perspective such as the Neuman Systems Model which provided the nursing frame of reference for this study. The purpose of this study was to test the Codependency-Overeating Model (COM) by examining the relationships between the variable of interest, overeating and the proposed predictor variables of codependency, anxiety, depression, anger and compulsivity.  Overeating was measured with the Overeating Questionnaire (OQ). Codependency was measured with the Codependency Assessment Tool (CODAT). Anxiety, depression, compulsivity and anger were measured with the Symptom Checklist-90-R (SCL-90-R). An Information Sheet was developed to obtain additional demographic and health related information.

This study used a model testing correlational design with psychology and sociology students recruited from the three campuses of a MS community college. Students aged 18-65 were invited to participate with a stratified cluster random selection of class sections that included 1273 students. Over a three month period, class sections were given an explanation of the study and when possible, the students completed the questionnaires during a class period. If class time was not possible, the students were reminded in one week and the questionnaires retrieved in two weeks. A locked collection box was available in the classroom for students to leave questionnaires.  Questionnaires were given to 810 students with 567 completing all four questionnaires. The majority of the sample was white (64.6%), female (65.6%), single (81.7%) with a mean age of 22.7. Small, not meaningful correlations were noted between overeating and the predictor variables of codependency, anxiety, depression, compulsivity and anger. Weak correlations were noted between age and anxiety (r= .12), age and depression (r= .20), age and compulsivity (r= .20), codependency and anxiety (r= .12) and codependency and anger (r =.16). No combination of predictor variables in the model predicted overeating and path analysis did not substantiate the causal paths in the original model. Although the model was not substantiated in this study, it was the first attempt to explore these variables in a single study and laid a foundation for future research. Subsequent studies, including qualitative inquiry, instrument development and replication with older participants or those with more codependency issues are needed.   Although the predictive relationships were not verified in the model, the COM can continue to be used as a base for a program of nursing research, to guide future studies with different samples, utilizing different instruments, designs, and methodology. This study successfully utilized a research design with four instruments for a large sample, producing an excellent response rate and data entry quality control results. In addition, several important ways to minimize limitations in future studies were identified. Optimistically, the development and testing of the COM was the beginning step in pursuing a solid understanding of overeating and codependency and a catalyst for worthwhile future research.

This work has been approved through a faculty review process prior to its posting in the Virginia Henderson Global Nursing e-Repository.